Both versions will be introduced at IFA early next month. Which one will be available in stores near you will allegedly be region-dependent (so, the two won’t compete for the same markets). 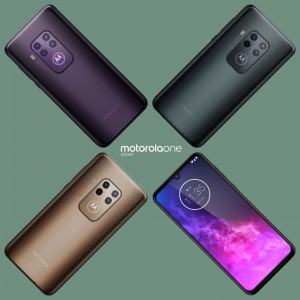 Motorola One Zoom in three colors

The quad camera on the back will feature a 48MP Quad Bayer sensor and gets its name from the zoom lens. It will offer 3x optical (81mm) and 5x hybrid zoom. There will also be a 13mm ultra wide-angle camera and a depth sensor. The camera app will feature a dedicated Night mode.

The 6.2” screen on the Motorola One Zoom is expected to be a 1080p+ Super AMOLED panel with an in-display fingerprint reader. This makes the Zoom more upscale than the Action and Vision. A leak on Amazon earlier this month points to a €400 price tag. This is with the Amazon content, so the One Pro may actually be a tad more expensive.

The phone will be powered by a Snapdragon 675 chipset with 4GB of RAM and 128GB storage (expandable via microSD cards). On the connectivity side there’s USB-C and a 3.5mm headphone jack.

We expect the Motorola One Zoom and One Pro will be available shortly after announcement – the One Action took only a week to go from unveiling to availability.

Instead hybrid zoom give us proper battery. 3500 is not enough for Todays crowd. One day battery life is old trend, catch up or die Moto. Don't bring this amateur marketing gimmicks like hybrid zooooom

Looks like the Moto logo is also the fingerprint scanner. The disassembled render shows something under the cameras.