A patent filed in the USPTO (United States Patent and Trademark Office) back in 2018 is now included in the WIPO (World Intellectual Property Office) too with a bit more details surrounding the design, functionality and features of the upcoming Motorola Razr 2020. 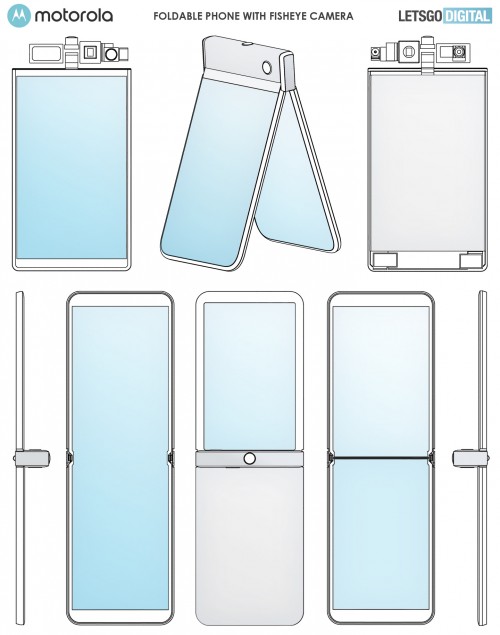 According to the patent, Motorola is thinking about resurrecting the so-called Moto Mods by making its next foldable smartphone with a modular design. A protruding middle piece housing the cameras can be used for elevating the phone when placed on a flat surface, for a more secure grip and for attaching the additional modules. Modules such as a projector, stereo speakers, etc.

The paper also describes some of the functionalities of the displays. Motorola might decide to go for two separate pieces of the display to bring the cost down instead of using a flexible panel altogether. Additionally, there's a secondary screen when the phone is closed - similarly to the Samsung Galaxy Fold.

In the same paper, Motorola also talks about a foldable design similar to the Huawei Mate X and Galaxy Fold - folding horizontally as opposed to the clamshell design that we've been talking about. However, besides the mention, there's nothing particularly interesting.

Of course, this is just a patent we are talking about so it may take some time for Motorola to bring this to life, if it happens at all. Only time will tell.

This gong to be very interesting.

Well, a selfish camera is the veey last thing I'd attached there... what else can they offer? ...quad dac... maybe a PROJECTOR? ;) Peace