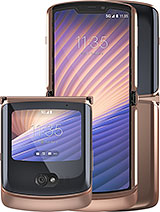 TheW00Xer, 14 May 2022I agree with everything you wrote. The new Razer doesn't look anything like Razer. It i... moreIt's not a phone for long lasting battery life. But Will hold you for a day if you know how to use it, more secondary screen etc...

The Flip, 09 May 2022The leaked Razr 3 is such a disappointment. It no longer looks like a Razr but a copycat clone... moreI agree with everything you wrote.
The new Razer doesn't look anything like Razer. It is a Flip copycat. Motorola should have stick with the signature design with the chin. People who complain can get the Galaxy Flip.
But I guess one positive thing that the new Razer might bring is price drop for the "old" 5g razer. I still haven't bought one because frankly, I can't afford it for the ridiculous full price that it's still holding where I am located.
I miss the old days of my Original Razr v3 and later v3x so I'll definitely go for this "outdated" gen2 5g model when I'll have a chance to get it for a decent price.

I am not a power user. My phone is mostly sitting on table or in my pocket while I listen to music through my bluetooth headphones (roughly 2-4 hours a day), web browsing and youtube for about 2 hours a day each and occasionally play some game although not anything hardware hungry except Wild Rift or Tapsonic TOP.
My current phone is Moto G6 Plus and the battery can last me full day when I leave home I leave with abour 75-90% of battery and when I'm coming home I have anywhere between 15-35% depending on my day.
So do you think I wouldn't be disappointed with the Razer 5g battery life?

The leaked Razr 3 is such a disappointment. It no longer looks like a Razr but a copycat clone of the Flip series or any foldable flip phone. I was ready to sell my Razr 5G because the lag was getting to me. I guess I won't any more.

I also don't like the camera placement. Yes, it's the same as the Flip 3 but that one's cover display was attached to the cameras. This Razr 3 no longer looks symmetrical. And no mention of wireless charging. It seems they will have "premium pricing", so that means $1400 again.

I always thought Razr was about style over substance. Looks over performance. They can't get it right. Lenovo seems to make Motorola less-American. Motorola is no longer that great American company I once knew.

And it's true. Seems nobody wants foldables. It's not the next big thing. People are content with their slabs and keeping them longer than before. For my personal taste, I'm sticking to foldable flip phones for life.

I tried using my Pixel 3 for a day and then went back using my Razr 5G and Flip 3. Feels archaic going back to a regular slab. But that's me. I don't speak for the masses. It's niche but I'll continue to support different form factors.

Currently have Fold 3, Pixel 6 Pro, Iphone 12 mini and this RAZR 5G. There's really no benefit with fold phones, I still don't know why I got the fold 3 TBH lol. However there's something special about the RAZR. It's built beautifully and a joy to hold and use. Would I pay full price for it? NO! Never. It doesn't have the faster chip and the camera is MEH. Battery life is ok only as well.

M father bought me the startac the mid 90's when I got in college, I bought the Razr V3X back in 2007, so I Loved this Razr 5G, and that large front display is a very good practical feature, it's mediocre internal spec is not a big problem for me, but the single cam configuration (in this day and age) is a majordeal breaker for me.
If it wasn't for the single cam, I would buy this phone just for its looks (and large front screen) alone, regardless the mediocre internal spec

Saul, 14 Jan 2022How is the phone holding up?Holding up great. Though I only started using it in December 2021. I slapped on a nice carbon fiber case on it-looks superb. I'm not a hardcore gamer so the lesser specs compared to Samsung don't bother me and the 256gb of memory and 8gb of ram is great. The camera seems up to par basically the only thing I miss is stereo speakers and maybe wireless charging but I'd much rather have fast charging than wireless. I dunno who keeps saying the screen coming off in theirs...I suspect trolls. The crease is negligible imho.

Anonymous, 21 Dec 2021I had an iPhone XS and was primed to get the iPhone 13 Pro but it just seemed just another bor... moreHow is the phone holding up?

I root for underdogs. Go, Motorola!

I also prefer Motorola over Samsung. Araree is South Korean They just didn't think it through scratching another South Korean product. I don't understand why they added those two little screws on the bottom half piece? My Razr looks flawless when I take it out the case. Only the case itself looks wrecked because the belt clip messes it up.

Anonymous, 21 Dec 2021I had an iPhone XS and was primed to get the iPhone 13 Pro but it just seemed just another bor... morebetter hope your flip screen doesn't come off, cause if you have little damage like my phone did, you'll have to pay for it again. I did love the phone so much and that why its a much bigger disappointment with the claims department, that I wont go back to Motorola, should have kept with apple, they have the best customer service than both Motorola and Samsung.

Anonymous, 15 Dec 2021I know… Been using the Razr 5G for a year now… Can’t wait for the 3rd Generation to come out n... moreI had an iPhone XS and was primed to get the iPhone 13 Pro but it just seemed just another boring slab with updated specs. So I took a chance with the Motorola Razr. Best choice I made. I always liked Motorola and flips and the camera is a lot better than people think.

MrQuackersHD, 02 Sep 2021I've had no issues with my screen looking like crap and my battery gets me through most o... moreI'm using this phone and an iPhone 12 mini and the battery on the RAZR is definitely holding longer. I love the phone even if my car is only compatible with Apple Car, but can't beat the feeling of this phone. I've got accident protection on the device and probably will leave it at that...no extended warranty. If it lasts one year ( I'm mostly concerned with the main screen going bad) , a year later a brand new one would be couple of hundred dollars, so won't wine about getting a new one. Also, worth mentioning I've got it for the$499 T-Mobile promotional price, so my perspective may be different than that of someone's who's paid$1,299 or anything above $500... I love the phone... for the price. For anything above that, I'd pick an One Plus or any Apple product.

Anonymous, 04 Dec 2021if it's that old u must've gotten the first generation one...well the 5G has a much ... moreYou work at Motorola or something?

joe nodden, 18 Nov 2021Lol as expected of these trash clamshell phones. if it's that old u must've gotten the first generation one...well the 5G has a much tighter and better installed screen

Lee From Staten Isla, 01 Nov 2021After only a year and 8 months, the screen on my Moto Razr has cracked right across the fold! ... moreLol as expected of these trash clamshell phones.

Lee From Staten Isla, 01 Nov 2021After only a year and 8 months, the screen on my Moto Razr has cracked right across the fold! ... morethat sounds like a load of BS tbh

you can get it for $499 at T-mobile nowadays

After only a year and 8 months, the screen on my Moto Razr has cracked right across the fold!

Worse, when I called Moto support, they said that they don't have a part number for it, and they tried to sell me another Razr for $1,050!

They also offered for me to take it to another state for an authorized repair.

I just leased a RAZR 5G. I love the phone, but the battery life could be better

Just got a Razr 5G for $499.99 and I'm obsessed with it after only 4 hours. This was the droid I was really looking for. I now own the two best foldable flip phones in the market. Razr will be my daily driver. I think it's already my favorite. It really looks better than my Flip 3. Easier to hold thanks to the curves and being a tad thinner when closed.

My more expensive Flip 3 becomes kinda like a Surface Duo. More of the media consumption device since Flex mode is so useful for watching vids and playing emus. Razr doesn't need to open up to do stuff. It can remain compact thanks to the bigger and far more useful cover display.

Don't listen to the reviews. Try it yourself. To me, Razr 5G is awesome!!! It feels like 2004 to me again. The year I bought a Game Boy Advance SP, GameCube, and carried two flip phones. Now both my current phones can play GBA and GC games easily. Will never go back to a slab ever again. Flip phones only for me for now on.