Motorola RAZR i review: Intel inside

The Motorola RAZR i is equipped with a stock Android ICS gallery. The Default view of the gallery is Albums - it lists all folders with photos in the phone. Rather than the familiar stacks, the app uses a grid of photos, which are two per line.

To be honest we were a bit that, coming with a new chipset, the Motorola RAZR i might lack support for some of the more popular video codecs. However, the smartphone managed to surprise us quite nicely, handling just about every video we threw at it played fine.

We tried DivX, XviD and MKV up to 1080p resolution and while some clips with higher bitrate weren't perfectly smooth, they were all able to run on the RAZR i.

Keep in mind though, that since there's no there's no dedicated video player app, you need to use the gallery for browsing and launching your videos. Once you start a video you are greeted by the stock Android video player interface, which is hardly the most functional around.

The video player is built into the gallery

The shortcut in the top right corner lets you share your video through Bluetooth, Email or upload it straight to a social network of your choice. There's also an option to stream it to a DLNA-enabled player near you and that's that.

The stock video player doesn't support subtitles, so you'll have to resort to a more feature-rich alternative in the Google Play Store (many of them are free). The good news is that the screen of the RAZR i is large enough and of high enough quality for enjoying video content, so once you get a proper player, you can tyrn the smartphone into great tool for watching movies on the go.

The Motorola DROID RAZR i comes with the latest Music app by Google. It has the same side-scrollable tabs like much of the other stuff in Ice Cream Sandwich. Naturally, it offers a link to the Google Play Music store as well.

Playing a song with the screen locked shows a handy music widget on the lockscreen. It displays the name of the song as well as controls for pause, previous and next. The same controls are available in the notification drawer, too, save for the previous button.

There's an equalizer too

Unfortunately, the Motorla RAZR i failed to impress in our audio output quality test. The Intel-powered smartphone came seriously short of most of its mid-range peers, let alone the best we have seen.

When attached to an active external amplifier, the Motorola RAZR i produced decently loud output with excellent frequency response, dynamic range, signal-to-noise ratio and virtually non-existent stereo crosstalk. However, it has absurdly high distortion levels, which ruin the overall experience.

Surprisingly, attaching a pair of headphones actually helps improve the RAZR i performance. Volume levels did drop a bit, but then so did distortion levels. However, frequency response and stereo crosstalk also worsened slightly, so the overall performance is no better than average here. 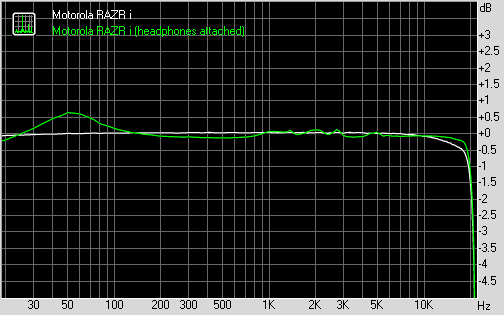