Motorola says the Flipout and Charm will not get Froyo, ever

Motorola Flipout and Charm users, we have to break out some bad news. Motorola won’t be bringing out a Froyo update to your devices. Yes, it sucks, but Moto has long stated that their users should buy their devices for what they're worth and now rely on a future version update. Lame, but true. 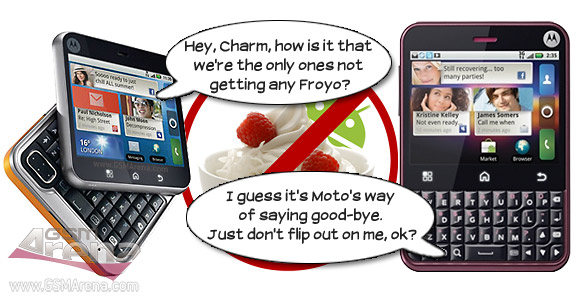 Unfortunately the Flipout and the Charm are never going to taste the yummy Froyo that other phones have had in their possession since day one. There’s only one thing to do now – hope that some good-hearted developer will make a custom Froyo ROM for both phones.

With Android 2.3 Gingerbread starting to roll by the competition, what is Motorola going to do about that? And most importantly – when. Information is scarce at the moment, but we hope Moto makes up for all the software update pain it has caused to its users, eventually.

Did you read this?: www.gsmarena.com/sony_ericsson_xperia_x10_to_get_gingerbread_in_q2_q3_this_year-news-2450.php And this?: https://supportforums.motorola.com/thread/45249?start=0&tstart=0 I'm a motorola defy user, but next time I won't buy...

I have seen and listen to such fairy tales from a looooooong time, every time we say something bad SE , a SE fan come in and say some excuse for the day, but have not see them happening really,SE fans are too much execuseees , misguide final...