Motorola X appears in white through a new press image

We already know that, Motorola X will be officially unveiled on August 1 in New York. The press image and specifications of the upcoming device from Motorola has already been leaked and we now have another press render, which shows the smartphone in a white paintjob.

Additionally, a new image from evleaks shows the side profile of the Moto X and reveals the presence of power button and the volume rocker there. 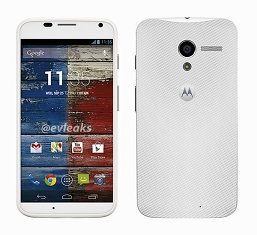 Meanwhile, the Motorola Moto X is rumored to sport a 4.7-inch display with a resolution of 1280 x 720 pixels and the smartphone is said to feature a Qualcomm Snapdragon MSM8960DT chipset with a dual-core processor clocked at 1.7 GHz and 2 GB of RAM. There's going to be a 10.5 megapixel rear camera, 2.1 megapixel front camera and 16 GB of inbuilt memory.

The upcoming smartphone from Google owned company will run on Android 4.2.2 Jelly Bean and the juice for the device will be provided by a 2,200mAh non-removable battery.

We will be bringing you all the latest news from the Motorola event live, so do check back with us for more information on the Moto X.

This phone is awesomeeeeeeeeee.....that's all I am gonna say!