HMD Global's ambitious revival of the Nokia smartphone brand has been going strong at an impressive pace these past few months. Nokia has already promised an "awesome" MWC 2018 press event and leaks are flying left and right, so there are no real signs of slowdown either.

In a new potential development, a rather interesting GeekBench listing has popped up online, originating from what appears to be a Nokia 7 Plus. Now, it is important to note that spoofing data for GeekBench and other benchmarks to pick up is not a difficult or uncommon process. 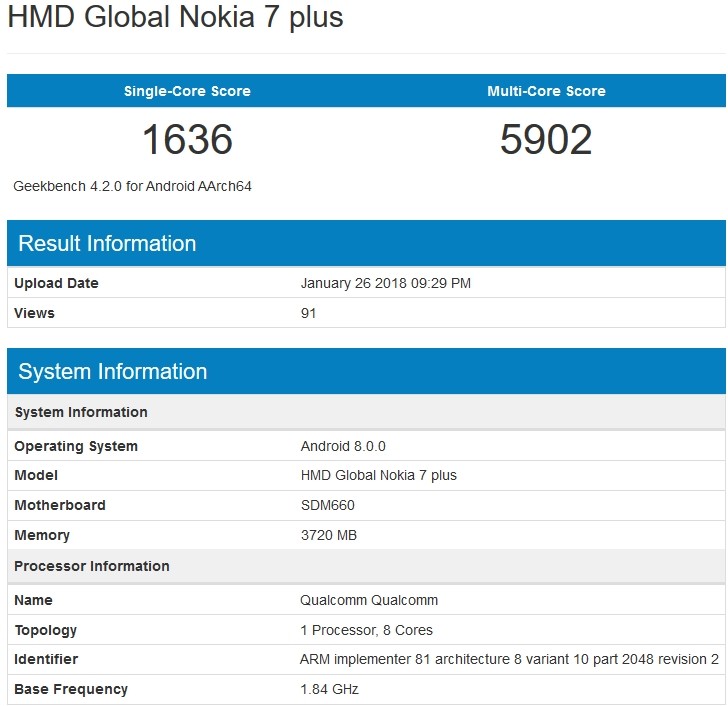 Still, given the benefit of the doubt, the Nokia 7 Plus actually sounds pretty exciting. As per the report, it runs of a Snapdragon 660 chipset, along with 4GB of RAM. The provided performance scores and frequencies match up with the chip in question, but, unfortunately, that's all the hardware information available. The only other small and predictable bit of info, being an Android 8.0.0 ROM.

If the Nokia 7 Plus does come into existence at some point, it would slot quite nicely in between the flagship, Snapdragon 835, Nokia 8 and the regular, Snapdragon 630, Nokia 7. While both the SD630 and SD660 are fairly new, efficient 14nm chips, the difference between the pair is not insignificant, including things like Kryo 260 cores, instead of Cortex-A53 ones and notably better Adreno 512 GPU and Hexagon 680 DSP. Definitely enough of a middle ground for a viable new upper-midrange offer.

Beyond that, some display size and resolution numbers would have been greatly appreciated in the leak, as well as camera setup info. Hopefully, we won't have to guess for much longer, since MWC 2018 is right around the corner and a recent FCC filing did reveal HMD is bringing two mysterious new devices to the US soon. Perhaps one of them could very well be the Nokia 7 Plus.

Thanks for the tip Mohd Hafiz

Come one guys, this is barely any faster than what I have today? https://browser.geekbench.com/android_devices/247 At this rate of "innovation" it'll take at least 5 years before I can have a worthwhile upgrade. Yet in 2019 my battery wil...