Mysterious Snapdragon chipset blows away the competition on Geekbench

We’ve already seen half a dozen smartphones arriving with the month-old Snapdragon 855+ chipset, and it appears Qualcomm is readying the next-gen chip, codenamed Qualcomm Kona. This might be the upcoming Snapdragon 865, expected to power the 2020 flagships, seen how the multi-core score of 12,915 beats every other phone so far. 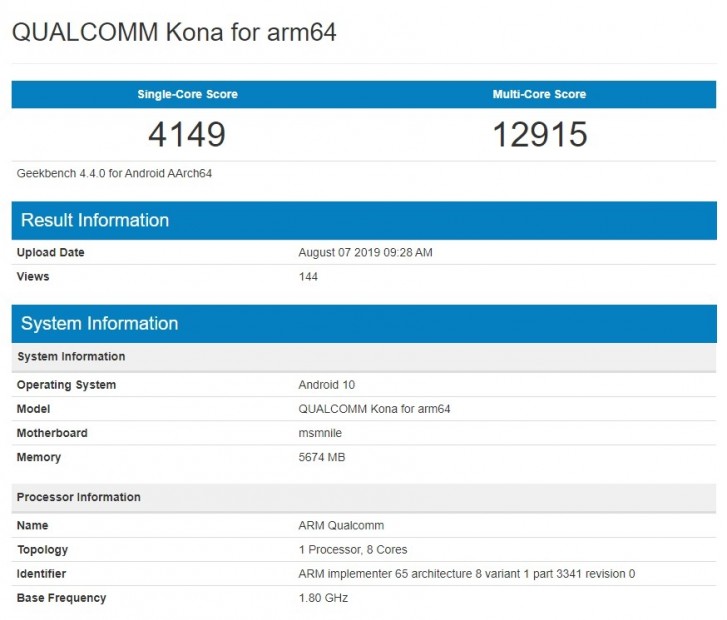 The device that the alleged SD865 is being tested on has Android Q and 6 GB RAM, but this is probably just a testing platform and not an actual smartphone. The base frequency is 1.8 GHz, but we expect the new chip to pass the 3 GHz threshold, even if its with only one core.

Currently, Qualcomm is right on the verge - the Snapdragon 855+ has one Kryo 485 CPU core that reaches 2.96 GHz speeds, so 3 GHz seems almost guaranteed for its next-gen CPU.

The San Diego chip company usually releases its 2020 flagship SoC in December, so we expect to see more benchmarks of the platform on test units before making it to the spotlight in Hawaii, USA. Usually, that’s where Qualcomm hosts its annual developer meeting where it introduces new technology and talks about future plans.

It destroys most of the high end mobile Intel cpu, what a time we are living :)

Can be the first running kernel mainland with security updates ?

fantastic news !! bravo and all that