An as yet unidentified device from LG has on the popular GLBenchmark GPU benchmarking site. This is hardly important on its own, but the results posted by its Snapdragon 800 beat out the competition by a significant margin. 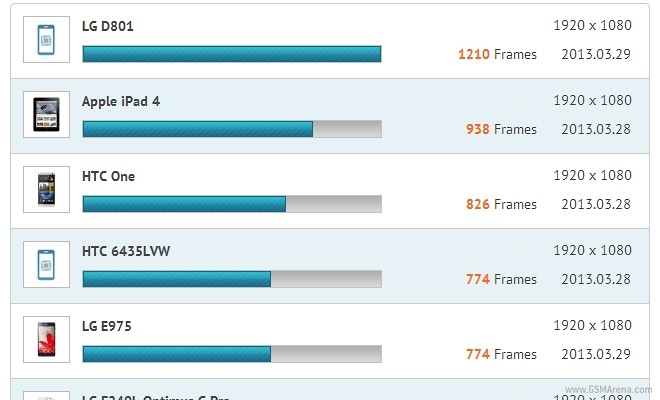 The device is set to feature the new Snapdragon 800 (MSM8974) processor alongside Adreno 330 GPU with a screen resolution of 1794 x 1080 (which is 1080p with virtual buttons). The new GPU managed to easily outdo even the iPad 4, let alone the current smartphone top dogs.

Not much else is known about the device beyond the Android 4.2.2 OS, although with such a specs sheet it will be quite a high-end offering when LG decide to put it on the market.

But I think it will not last for long

Processing power means nothing in mobile devices, with the exception of laptops. See where the iPad 4 got on just 2 Swift cores. Its the GPU that counts. To all Samsung fanboys out there, the pseudo 8 cores in the GS4 mean Jack Shit when it come...

@keke Nothing will happen. The SGX554MP4 GPU (iPad 4) is only for tablets. The only way the iPhone 5s will be faster than anything else is if they go with a PowerVR series 6 GPU (rogue), and that doesn't necessarily mean it's going to blow every...