Nearing its possible August 13 unveiling the Samsung Galaxy Alpha has leaked in a new series of photos. There's new information along with the photos that the device will make an appearance earlier than expected on the IFA fair in Berlin and make it to the Netherlands in late September.

The device will feature a metal frame, glass front and a plastic back panel that sources claim is identical of that of the Galaxy S5.

Looking at the image with the AnTuTu 4 score the Samsung Galaxy Alpha is expected to pack quite a punch - besting the Galaxy S5 and HTC One (M8). 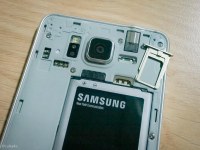 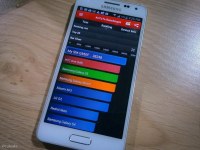 Sources in the Netherlands point that the Galaxy Alpha will be priced between €500 and €550. Retailer Mobilefun even claims that the phone will tip the scales at a hefty €700 in the UK but that seems very unlikely.

The next leak shows what appears to be an ejectable, metal nano SIM card slot, making the Galaxy Alpha the first Samsung device to support the standard.

The leaks suggest that the Samsung Galaxy Alpha will sport an octa-core Exynos 5 Octa chipset, 2GB of RAM hexa-core Mali-T628 GPU, and a processor that can clock up to 1.8 GHz. This information clashes with the rumors we've seen quoting the Galaxy Alpha to use an Exynos 5433. The rest of the specs match previous rumors - a 4.7" 720p display, 12MP snapper on the back, 2.1MP one on the front, LTE, Android 4.4 KitKat and a 1,850mAh battery.

At least the phone's exterior looks to match across the different leaks. We've shown you images of the device before and it looks to have metal on its frame-only and otherwise retain the faux-leather back and front design of recent Samsung flagships.

this is fuck** awesome mate , this phone is performin bloody well !! i like to have my hands on that phone , i hope it would be a budget friendly epic phone ! cheers