New BlackBerries coming today, is it the Torch 2 and the Touch 9860?

We know for sure there are new BlackBerries coming today - RIM took to Twitter and Facebook to generate some buzz over the upcoming BB OS 7 phones. Are they the Torch 2 9810 and Touch 9860? Well, leaked press shots of these two devices make them the best bet.

The BlackBerry Touch 9860 (a.k.a. Monza) is no stranger to the rumor mill either - it packs the same specs as the Torch 2, save for the 3.7" WVGA screen and no hardware keyboard.

Update: We've seen a report that claims the Touch 9860 is actually the Storm 3. Also, BlackBerry's site jumped the gun and confirmed three versions of the Torch 2 - 9810/9850/9860. We're still waiting on the official announcement. 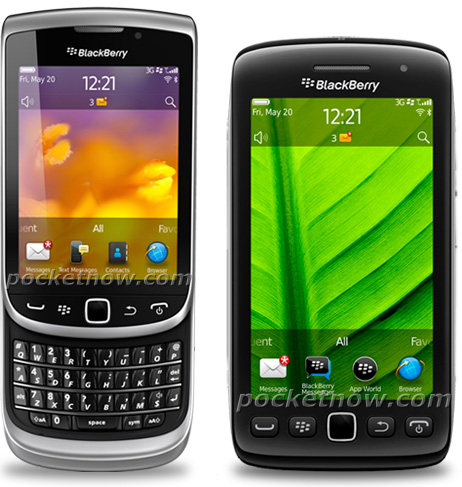 Well, these leaked press shots come with no carrier branding but the "3G" label in the top right corner suggests those are GSM models. The Touch will have a CDMA version too - used to be called Monaco, but now seems to go by Volt.

Oh, and there's the BlackBerry Bold Touch 9930 too, which is official, but hasn’t launched yet - so, maybe today is the day for that too.

We're keeping an eye on RIM and we'll let you know as soon as the new BlackBerry OS 7 phones break cover.

So what happened here? Any new phones?

The udpate is available in Canada too.