Last December HTC told us that it would focus on flagship and mid-range smartphones this year, and today a new device from the Taiwanese company has showed up on Geekbench confirming that.

The phone has the model number 2Q7A100, and it's powered by Qualcomm's Snapdragon 710. That's a good upper-midrange chipset, but the Snapdragon 730 has become official very recently. And since this HTC handset hasn't leaked at all so far, we assume it's not close to launch, so using what is, for all intents and purposes, the Snapdragon 710's successor would have been nicer to see. 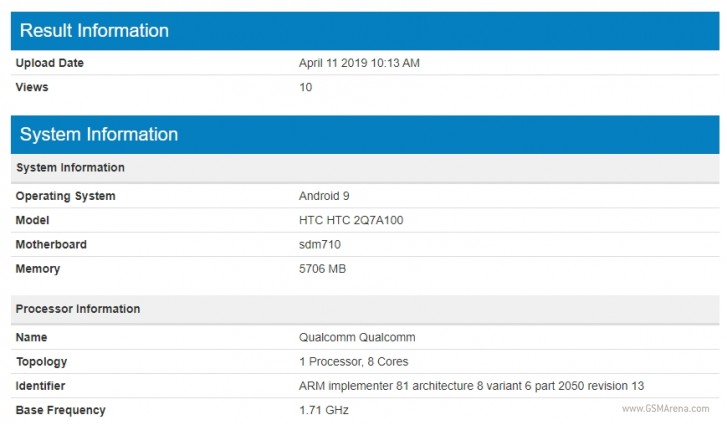 Still, it is what it is. The SoC is paired with 6GB of RAM, and the phone will run Android 9 Pie, unsurprisingly. Those are all the details that the benchmark database has revealed, but we're looking forward to hearing more about this upcoming HTC phone. While it's still going to be mid-range, its chipset makes it higher-end than the company's current top spec mid-ranger, the U12 life.

A NON super glossy back would be nice. Even a metal back would nicely go against the trend or a blend. Hardware with a bit of solid stylish character and personality

HTC still my favorite despite it is ups and downs, The Main Problem with HTC is Marketing, All the Mobile companies have went through good days and bad days but HTC one of the best (in its scale) Mobile Companies, Just need to fire its Marketing Dept...