The HTC Pyramid seems to like the spotlight, as it's popping its head more and more these days. This time it seems like the real deal, well the picture anyway, no specs still. But a picture is still worth a thousand words, as they say. 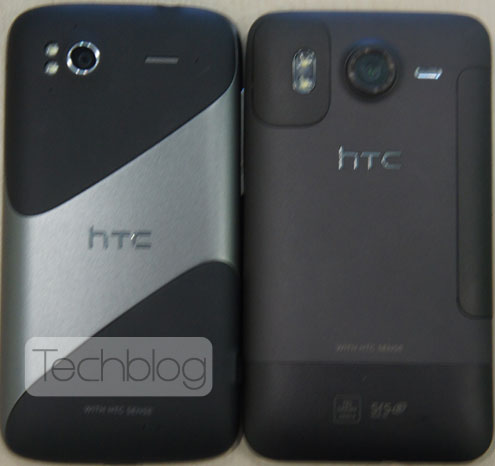 In the blurry photograph itself we get to see the new HTC Pyramid alongside a Desire HD, both showing only their backs to the camera. There's a camera with a dual-LED flash on the back of the Pyramid. We also get a look at the half-plastic, half-aluminum casing.

What's important, is that the previous rumor that the HTC Pyramid will have two cameras for 3D capture turned out to be completely wrong. There's only one camera on the back of this phone.

This might just be the first dual-core HTC smartphone to hit the shelves. There have been some benchmarks a couple of days ago showing this same device clashing with the best in business, strutting some 1.2 GHz dual-core Snapdragon processor and a 540x960 resolution. We're yet to see if it will hit the shelves with the same specs.

Not to mention we don't have any info on when that's going to happen anyway.

man this is gonna be a huge hit. For those of you who dont know , Nokia is already in talks with HTC execs on joint development of new genaration windows phoneS~~! that is sooo COOL

No it should be 4.3". Man this phone is even slightly bigger than a Desire HD!

The size is similar to the Desire HD so it must have a 4.3 inch screen...