A Reddit post gained some attention after a day or so, originating from a member of a Brazilian Moto G4 community on Google + who claimed that he had the device in-hand for testing on operators. Unfortunately, he doesn’t talk much about the phone in the photo’s comments.

What the Google + user did mention was that the alleged device features FM Radio, Digital TV, and that the G5’s SIM slot has been changed to a nanoSIM, an update from previous generation devices that accepted microSIM cards. 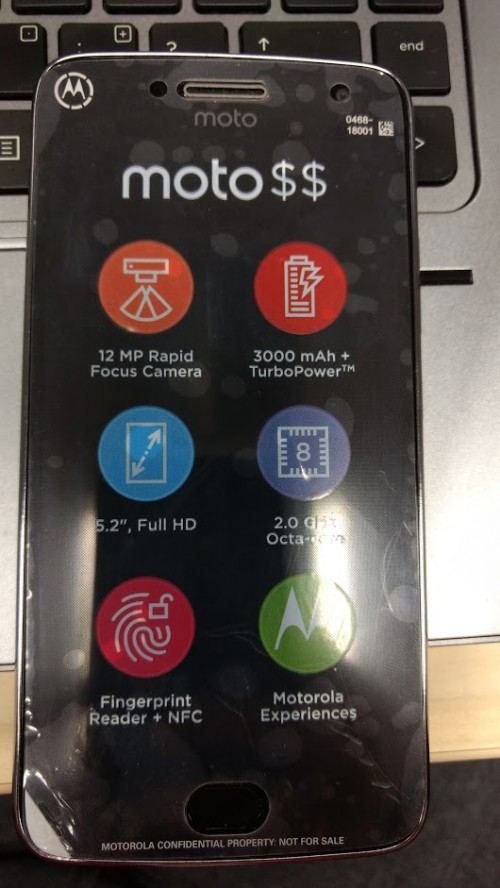 Otherwise, the protective plastic on the handset’s display gives away a few more features like the smaller, 5.2” screen, 12MP “Rapid Focus Camera”, Fingerprint reader + NFC, and the TurboPower-compatible 3,000mAh battery. The plastic film also calls the phone “Moto $$”, these are placeholders for the name of the device.

The first thing many noticed was the new shape of the fingerprint sensor and how it is dissimilar to the square-shaped one found on the Moto Z family.

Confusion also surrounded many who wondered why a supposed Moto G5 Plus wouldn’t measure 5.5 inches diagonally in its display. The reason for that is the Moto Z Play is already running the Snapdragon 625 with a 5.5-inch screen and is compatible with Moto Mods. So it would not make much sense to release two devices with identical specifications as Motorola would end up competing with itself.

phone will probably go on market in march/april, there is a big round camera bump on back

5.2 inch but bezels are not as small as earlier times. People want a small phone with biggest possible screen.