The Samsung Galaxy A90's presence is the rumor mill has been rather confusing so far. What was initially believed to be a re-branded Galaxy A80 for different markets was later mistakenly associated with a mysterious new Galaxy R series. Thankfully, after the latest batch of leaks, the story is starting to make more sense. 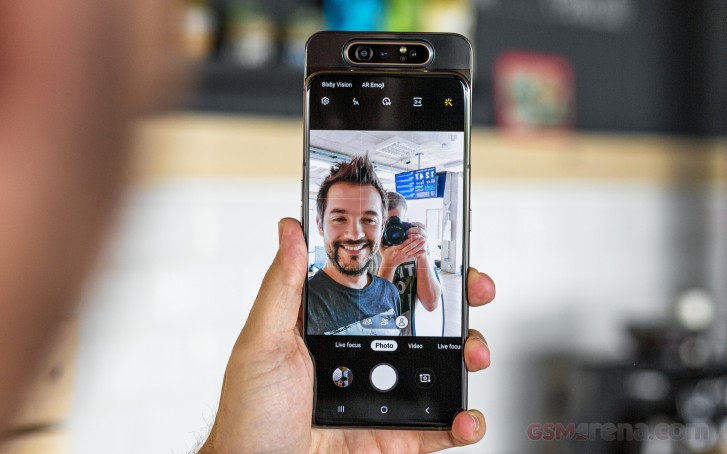 As far as we currently know the Galaxy A90 moniker will be a reality. In fact a total of two handsets will likely carry it - SM-A905 and SM-A908, probably along with some other "Pro" moniker. Both are expected to feature a Snapdragon 855 chipset - marking a Qualcomm flagship debut in the Galaxy A line.

Camera-wise, the SM-A905 is said to have a 48 MP + 12 MP + 5 MP setup, along with a mysterious "Tilt OIS" feature. While the SM-A908 will likely be getting a 48 MP + 8 MP + 5 MP arrangement on the rear. One bit of new info here regarding these snappers is that apparently they will not be mounted on any motorized periscope or swivel, like the Galaxy A80. Instead going for a traditional setup on the back.

And in another addition, one of both likely called #GalaxyA90 (SM-A908) comes with a FHD+ sAMOLED Infinity-U display...

As for the other new detail, apparently the SM-A908 will be getting a FullHD+ Super AMOLED Infinity-U display. The diagonal on both the SM-A908 and SM-A905 is said to be 6.7 inches. And seeing how the Infinity-U design is typically considered "lower-tier" in Samsung's current lineups, we can probably assume the SM-A905 will have a higher-end QHD panel to go along with its seemingly better (on paper, at least) camera setup and Tilt OIS tech.

That being said, the odd part here is that all the leaks thus far claim that the SM-A908 will be the one getting 5G connectivity, while its sibling probably won't. So, could Samsung be trying to offset some of the steep 5G extra cost by cutting down on other hardware? A rather interesting concept to consider for sure.

You're at the A90.... what are you expecting? Go look into lower models A30s etc. Number reflect a relative increase in screen size. It's obvious the higher the number the bigger the screen, why act surprised.. there are other offerings for you out t...

And you don't want companies to improve their products and prices?