It seems that the insanely expensive LG GD910 wristwatch phone will be getting a successor. The evidence is quite solid - the new watch phone posed for some live shots during the LG Digital Experience in Brazil. 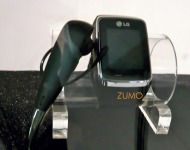 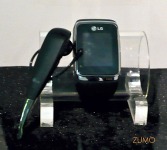 As you can see from the photos the new gadget resembles its predecessor and remains on the thick side. The two "major" differences in the design are the oval edges and the LG logo position. The Bluetooth headset also looks the same as those supplied with the GD910.

The new LG wristwatch phone compared to the GD910

LG refused to give any additional details so far, but we'll keep you posted once more specs pop up.

how I wish this watch phone will be available in Mindanao CDO to be specific. It looks amazing,its a little yet clever thing.

Mate you know nothing, LG launched the first VIDEO CALLING watchphone. Tell me who are they copying?? Go back to your Iphone and google your facts before you bark accusations

i have never seen this type of phone in any company,, SEXY PHONE..