A new leak has surfaced online, confirming some of the already-known key specs of Microsoft's upcoming Lumia 950 XL smartphone. The said leak is in the form of a screenshot of the device running build 10547 of Windows 10 Mobile (shown below). 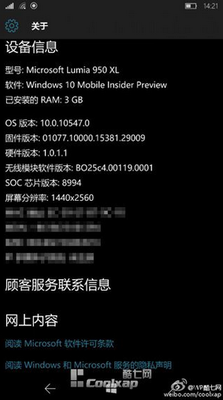 The screenshot above confirms that the Lumia 950 XL will be powered by a Snapdragon 810 SoC, and sport a 1440 x 2560 QHD display. It was also confirmed that the handset will have 3GB of RAM.

Other specs that we already know are: 32GB expandable storage, 20 MP rear camera, 5 MP front shooter, USB Type-C port for charging, and 3,300 mAh battery. As for the price, a recent leak suggested that the dual-SIM variant will carry a tag of around $840, at least in Europe.

Microsoft just need to forget about the cell phone market they have lost. They are just throwing good money at bad. They make money every time an Android phone gets sold anyway they should help Google and hop on the Android bandwagon. That is how ...

They can't dominate with that price!