Microsoft's Office suite hardly needs an introduction at this point. As one of the oldest and richest platforms around, it is more or less the standard when in comes to word editing and spreadsheets. However, the suite is actually quite a lot bigger than that and has more interesting software to offer, like OneNote - the free-form note taking app that, unlike Word and Excel, seems to be struggling for mass popularity.

It appears Microsoft has decided to put some extra effort in its OneNote product campaign with a new importer tool, aimed squarely at attracting existing Evernote users, by giving them a way to import all their work. The tool currently supports Windows 7 and later on PC, but once you sync everything, it will appear across all your devices, mobile too. An OS X version is also said to come shortly.

It is a pretty feasible strategy and could have even passed as a nice little time-saving gesture to prospective migrating users, were it not for the accompanying marketing campaign that openly takes a stab at Evernote's services.

For one, Microsoft has really made sure to point out the fact that OneNote is free on any platform and in the entirety of its feature set, whereas Evernote has an optional "Plus" tier, which gives you access to things like offline access to notes on mobile and a 1GB/month data upload cap for $50 per year. While this is technically true, the points of choice within Microsoft's comparison table is oddly favorable towards the US giant. 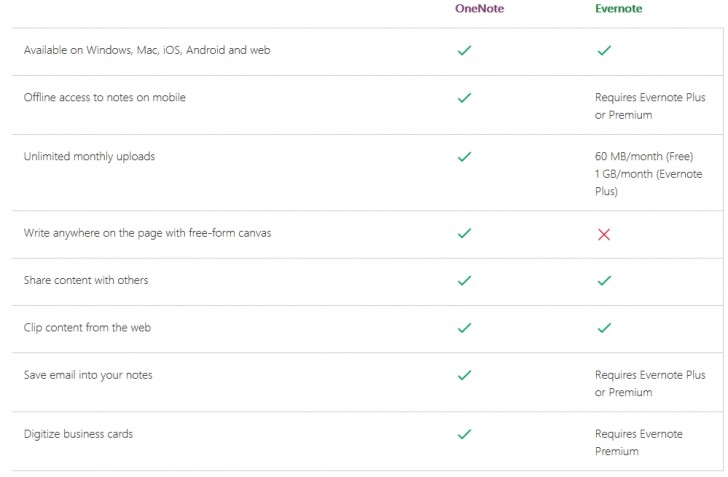 Truth be told, both platforms have their weaknesses and strong point. You might like OneNote's free-form canvas approach, that allows you to write anywhere and pull and mix all sorts of content freely, but on the other hand, Evernote is arguably a lot better at saving, pulling and clipping web content and it has really been trying hard to branch out into the collaborative working area of the business market.

Free-form of OneNote is very easy and convenient to use in my 1020 and laptop.

And after sometime MS will start charging premium like they did on Onedrive Microsoft Can not change, Betraying it is in their blood this what they do best so don't bother