The Oppo F5 is coming on October 26. In addition to the announcement date, the Chinese company also confirmed the F5 will be the company's first phone with 18:9 FHD+ display (2160 x 1080 pixels).

We also heard the phone will pack a 6-inch display, 6GB/64GB memory, and Snapdragon 660 SoC. The phone is said to feature a 20MP rear camera and a 16MP dual camera setup on the front, as well as pack in a 4,000mAh battery.

Now, a new leak has surfaced, from a Philippine online retailer - the debut country of the handset. While this new leaks confirms most of the already-rumored specs, it differs in the front camera details, saying the phone will feature a 12MP dual camera setup instead. 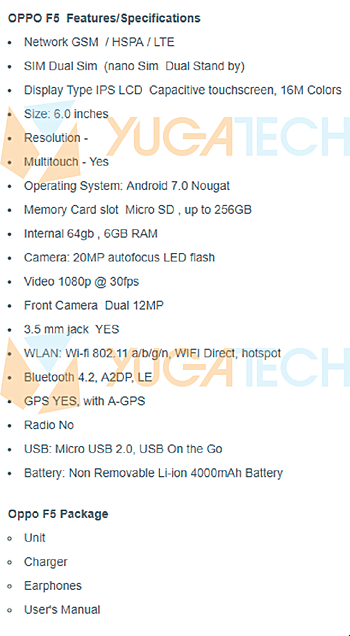 We couldn't verify the information by the new source, so don't take it as a certain deal. The Oppo F5 is coming next week, so we'll know soon enough.

Nice.. I meant the girl not the phone