New photos size up the Galaxy Alpha against the iPhone 5s

The Samsung Galaxy Alpha leaks just keep on coming. The latest one is a double one including partial specifications as well as new photos.

Courtesy of Twitter user @culeaks, we can now see the Samsung Galaxy Alpha compared with the iPhone 5s. The phone is even thinner than the 7.6mm Apple smartphone. However, there's no information of the Galaxy Alpha's exact dimensions yet. 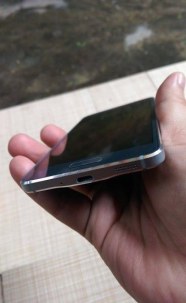 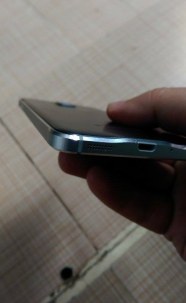 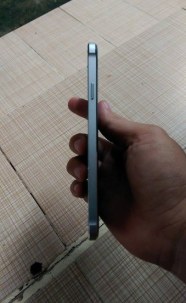 We also get to take a look at the phone from below, where we find its speaker alongside a microUSB port an the microphone. The phone will sport a removable, 1,850mAh battery. This may sound like too little for a 4.7" smartphone, but it's still in line with what the smartphone's key rival, the iPhone 6 is allegedly going to offer.

The Samsung Galaxy Alpha carries the SM-G850 model number and packs an Exynos 5 Octa chipset with four Cortex-A15 cores and four Cortex-A7 cores. Internal memory is reported at 32GB, sans microSD card, while the screen is of the Super AMOLED type and rocks a 720p resolution.

At the back, the Galaxy Alpha sports 12MP snapper with LED flash and the phone is running Android 4.4.4 KitKat.

If you live in the UK, you can place a pre-order for the phone already. We can expect the phone to be announced as early as next week, but there's also information that it can happen as late as September 13.

No waterproof? The Micro Usb port doesn't seem to have cover so seal it. Exynos chipset(was hoping for S805), 720p display(they say it's gonna be QHD). I felt like an idiot waiting this long for something slightly downgraded. If it's disappointing in...

yeah, apple doesn't innovate anymore. So does samsung. there's nothing left to copy