The next-generation flagship from Sony, the C660X Xperia Yuga, has already made a few unofficial appearances and now it has fallen into the hands of Eldar Murtazin. He posted two new photos and confirmed a couple of features, which the rumor mill was uncertain about.

The back of the phone is flat and made of black glass as previous rumor indicated. There's also a shutter key on the side of the phone.

As for the screen, it's a 5" LCD with 1080p resolution (and not OLED). The chipset inside is a Qualcomm Snapdragon S4 Pro and not a Samsung Exynos 5 Quad, as previously rumored. It's interesting that Eldar reports that the Yuga can get quite warm when the chipset is under load (we've seen a similar thing happen with the LG Optimus G and the Nexus 4, which use the same chipset). 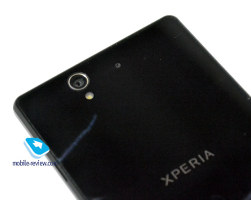 What Eldar didn't clarify was the camera resolution. Early rumors pointed to a 12MP or 13MP camera (settling on 12MP), but a new rumor cropped up saying the Yuga will pack a 16MP shooter.

Sony is expected to unveil the Xperia Yuga (under another name, of course, Yuga is just a codename) at CES and bring it to the MWC later too.

Arc is the best design Sony ever created. But it's not the most boring design ever s3 deserves the spot. S2 looks better than s3

That has got to be the most boring design ive ever seen, it looks like a slab of butter colored in black. I hope sony brings back the x1 or arc design because those look a lot better if you want an all black phone you need to make it scratch proof o...

Look at the new yuga review.Battery and overheating problems.Although the overheating is maybe there just coz its a prototype model. And it doesnt have Dragontrail glass on the back either.Flimsy plastic like material.M7 is gonna be pure metal.I'm ...