Samsung has started pushing out a new update to its Galaxy J5 (2017) smartphone. Currently hitting units in Europe, the update weighs in at 392MB, arrives as version J530FXXU1AQI3, and brings along fix for the BlueBorne vulnerability. 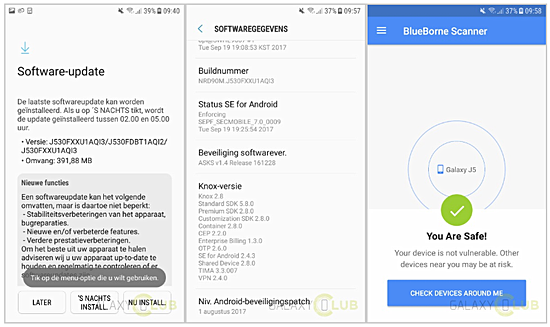 The vulnerability, for those who aren't aware, allows a remote attacker to take control of devices via Bluetooth. What's more bothersome is that the process doesn't even require the device being attacked to be paired to the attackers device, or even to be set on discoverable mode.

So this is no doubt an important update. In addition, it also includes Android security fixes for the month of August.

I know BB10 OS was abandoned by Blackberry, my point is QNX (BB 10) appears to be the pioneering S/W in driverless cars... So when that is a success Third part apps follow phones, Nokia phones would have preferred a more secure S/W if not i...

Naa. Nothing is as ugly as iphone x, nor as unfunctional, imagine watching video with that ugly cut out, and two bats ears, lol. Its one of Samsungs lowers model screens ( low brightness, low pixel ratio, apple stuck in for cheapness.) which apple ...

Its not iPhone X without the ugly notch at the front...