Samsung has started pushing out a new update to its Galaxy J7 (2016) smartphone in India. Weighing in at around 135MB, the update carries a firmware version of J710FXXU3AQF6, and brings a handful of changes. 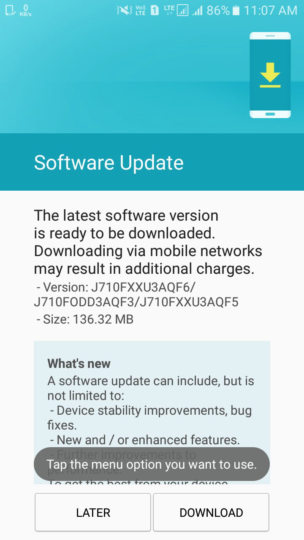 The key upgrade is the added support for Pay Mini, which is a stripped down version of the company's mobile payments service Samsung Pay. Android security fixes for the month of June are also included.

Finally, the update also brings some stability-related improvements and bug fixes. Given the fact that it's an OTA roll out, it might take time for the update to hit your device.

Still no update here in Croatia. Hope it arrives soon.

Just now downloaded the update on my J7-2016 edition, 14 months old .. Let's see what brings in the upcoming updates ..

Yes i got the update today and i got the pay mini icon but when i open it. There is just know more option in the scree