New Sony smartphone launching in 2018 has specs outed by benchmark

Another new Sony smartphone being prepared for 2018 has been outed today, following the appearance of the H4233 back in September. This time around, the Sony H4133 is the star of the show, and it's been revealed through the GFXBench database.

As usual, this helpfully lists the phone's most important specs. The H4133 is intended as a mid-ranger, which is made obvious by the presence of the Snapdragon 630 chipset at the helm. That's aided by 3GB of RAM and 32GB of storage. 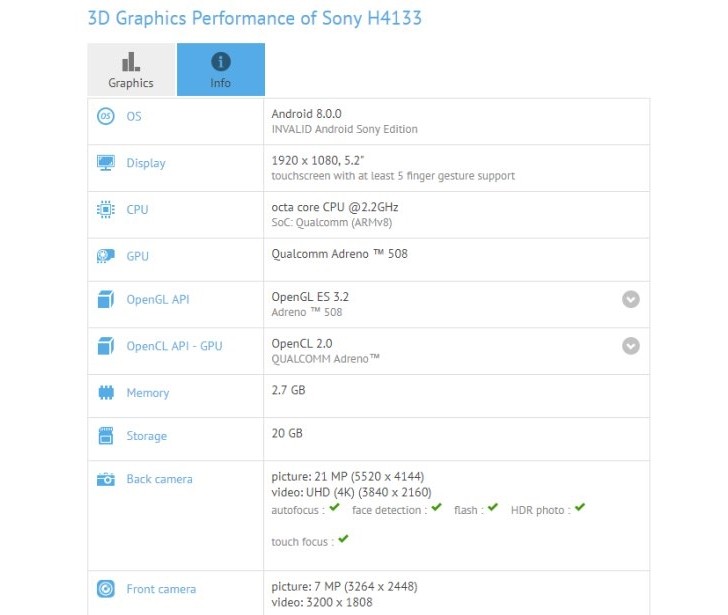 The Sony H4133 has a 5.2-inch 1080p touchscreen, and a 21 MP main camera with 4K video recording support and an LED flash. For selfies it's equipped with an 8 MP snapper. All the usual connectivity options are built-in, including NFC. The device currently runs Android 8.0 Oreo.

Since its model number starts with "H", this phone will only be launching in 2018 (Sony increments the letter every year, and 2017's handsets started with "G"). As such, we fully expect it to debut with Oreo on board, perhaps even a later iteration of the OS.

Samsung galaxy phones did sell well. However, because of the note 8's announcement. Samsung choose to lower the price of the S8 and S8+ since the majority of sales would go to the note 8. Leaving the sales for the S8 and S8+. Most people who owned ...

(Cont @ Foxtrot2Novmbr) As for that video about charging the XV Premium and comparing them to the others, the dude should turn off the battery care and turn on the battery optimisation. I don't own the phone but have one in the house and even I kno...

On your comment about the price drop of the latest Sony flagship, my brother paid nearly £1000 for his Samsung 8+ when it came out & I've been taking the mick mercilessly because in only a few months it's just about halved in price & go...