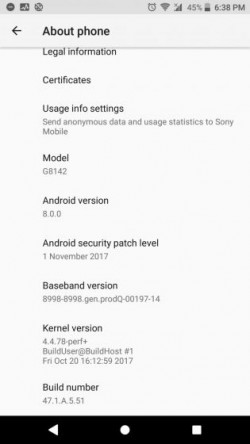 A new update is currently rolling out to Sony's Xperia XZ Premium, bringing new security patches and fixing a nasty camera bug. The XZ Premium was the first Sony handset to be upgraded to Android 8.0 Oreo last month, and now it seems like the company is intent on also keeping it up to date when it comes to security.

That's because the new release has the November security patches for Android built-in. These were just outed by Google for its Nexus and Pixel devices at the beginning of this week, so it's swift moving on Sony's part here.

The new software also fixes a camera issue that made the laser autofocus sensors not work as intended in the dual-SIM version of the XZ Premium. After you apply the update, your phone will be on build number 47.1.A.5.51, up from 47.1.A.3.254 previously. The Android version is still 8.0.0 of course - 8.1 is only in beta for Google's devices at the moment. The new firmware for the XZ Premium is already live across a number of regions, so if you own one perhaps try mashing that Check for updates button in order to get it.

Quick Charge operates within the design parameters of batteries found in most smartphones. It is just charging the battery the way it is designed to be charged. Device manufacturers build smartphones with a specific battery that can accept a spe...