Xiaomi to launch Redmi Note in India next month Comments 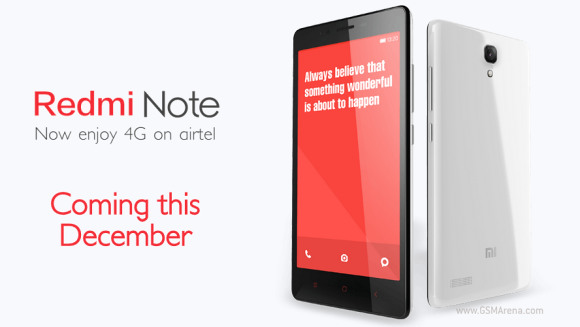 Gold is now priced at Rs 13500 but some ecommerce websites are selling it for Rs 11000.
It has 1080P Full HD display compare to Redmi 720P
Gold has Great Design and premium look with metal case compare to boring Redmi design and look
Gold runs on KitKat latest but redmi with 4.2/3 jelly bean.
Almost same processor, RAM.
Now the disadvantage of Gold.
Gold has 2300 MAH but redmi note has 3100
Gold runes out with battery faster and it has poor wifi connectivity.
Unless Redmi note launch for Rs 8000 it cant impact much in india like how they did with redmi 1s. but if they launch for 9999 then i prefer canvas gold for its look and design

AnonD-128840, 21 Nov 2014Canvas gold is much better than thisHa ha ha are you high? We are taking about products with some level of quality standards.

Huh, where did this crap come from and why the hell people are comparing it to branded manufactururers. Brand just doesn't mean more money, more features but branded manufacturers ask huge prices for their phones because they make phones worth the asking price. A phone is not only about specs but about quality and satisfaction for what they pay for it. If you compare xiaomi to samsung, htc, moto, or any branded company, then surely your gone mad.
Ask users who has used both, A moto g and a redmi 1s or whatever u call it, then you'll come to know why xiaomi prices their phone so cheap.
The screen used in xiaomi phones are crap. If u compare it side to side even with a qhd or a wvga screen, it pales our coz the colors are washed out, and no one wants only crispy text, but also punchy colors. Jus compare the screen with a asus zenfone 5 and u'll come to know truth

I got MI3 and redmi 1S for my parents. It's really worth for its money.
Mi3 comes with snapdragon 800.
I bought many xiaomi for my friends too.
I don't find any serious problem with redmi. It's really worth the money.
In four years they r the 3rd largest phone company. The no speak for it self.

indians prefered xiaomi than any other brand. its the best phone ever!

Awesmome Guys for your comments!

Where is Samsung :D LOL

I have been using Redmi 1S for the past two months, but I'm planning on upgrading my phone already. I might just skip this Redmi Note, and wait for its successor, Redmi Note 2. Rumor land says it's going to come with a 1080p display, Snapdragon 615 chip-set, 3 gigs of RAM, and an improved camera.

Anonymous, 21 Nov 2014Yep, and not to mention the iOS-like interface, which is another failureSo you don't know that Xiaomi had those icons and colors a long time before Apple introduced iOS7? Apple is the one copying here.

awesome I will buy it before 2 seconds or less

Canvas gold is much better than this

AnonD-53653, 21 Nov 2014True, Redmi Note sells because hype. It turns out a substandard phoneYep, and not to mention the iOS-like interface, which is another failure

The only thing that helps xiamio to sell more phones is due to flash sales model. otherwise ppl would have got more time to go thru review and decide if its worth or not.

From what I've heard Xiaomi isn't giving the great after sales service it had promised.. People say when they go to the service center (which are few in number) to get their cracked screen repaired they are told about "atleast" a two month waiting time as they don't have the parts.
They need to fix that before thinking of world dommination :P
Maybe jackup the prices so that they can support decent aftersales..

it seems that Redmi Note is as the same specs of Huawei Honor 3x better known as Ascend G750. but, how about the price?

AnonD-328637, 21 Nov 2014Redmi note is not that impressive.It's a complete failure - extremely poor battery, extremely poor audio quality...unfortunately proplr are totally brainwashed by smartphone industry and tend to weorship most brands while turning a blind eye on the disadvantages

Redmi note is not that impressive.

Xiaomi to launch* Redmi Note in India next month

not relaunch
it's first time in India