iPhone 5 coming in September, iPad with Retina display and more

The Apple WWDC event came and passed this month without an iPhone announcement for the first time since they launched the original 2G in 2007. Speculations about the launch date of the iPhone 5 (or 4S) have been circling around ever since.

New info brought to light by Bloomberg pinpoints September as the most probable time for the announcement and launch of the next-gen iPhone. Apple have a traditional September event, which however has so far been focused on iPods and music. 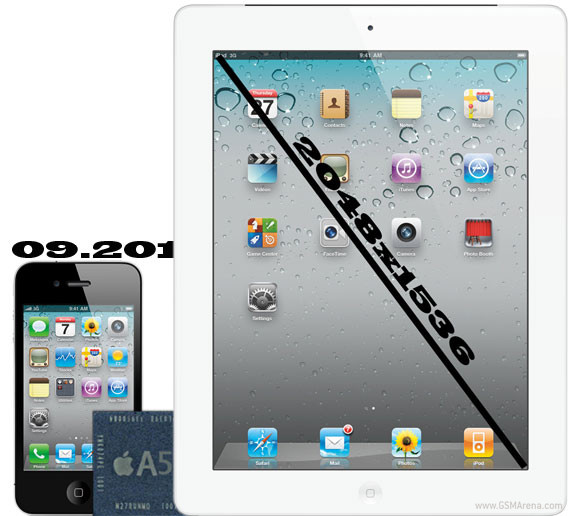 Bloomberg cites two unknown people, which are familiar with the next iPhone. It's no secret that a prototype iPhone "4S" (sharing the iPad 2's dual-core A5 chip) has been given to certain developers - so it really isn't hard to believe that the next iPhone is on its way to millions of inpatient fans. The question is only "WHEN?"

Bloomberg also shares that apart from the upgraded processor, the next iPhone will have a more advanced camera. This could mean improvement in the sensor, technology and so forth but doesn't exactly give out the resolution. Hopefully it will be an 8 MP unit with 1080p video capture.

There's also a rumor that the next iPad is being tested currently. It supposedly has a higher resolution display and that's about it. We've heard that one before about an iPad with a 4 times greater resolution (2048x1536). Remember, this rumor is based on graphics found in the latest iOS 5 SDK. We've heard rumors of next-gen iPad coming as soon as this Fall before but we've never thought there's much truth in it.

We're not done yet folks. It seems that a cheaper iPhone is in the works, intended for developing countries. That sounds ridiculous for a premium hardware manufacturer like Apple, but hey - we might as well pass on the information. It isn't the first time we've heard of such nonsense.

Finally (yes, this is it) we've heard through the grapevine that Apple is thinking of "reinventing" the TV segment with its own iOS-wearing-big-screen-flaunting TV. Yes - an Apple HDTV with AirPlay, apps and all. AppleInsider claims a new product line is about to spawn. Though we find the idea of Apple's design and high-quality screens combined with the smart internals of a iOS device a great one, we somehow doubt that Apple, the computer company, will be dipping its toes on the HDTV market.

I wish apple to start producing mini ipad/iphone 5. I have owned IPAD but it to big to carry around. Hoping iphone 5 (to be a five inches mini ipad and a phone. I love the display in IPHONE 4 and the smooth tasking, but it's small and battery life is...

I'm using since one year an android device (HTC Legend) but it has too many flaws and bugs. I'm tired to reboot it to regain its speed after having started several basic apps. A friend has a 3Gs, same cpu speed (600MHz) and it is much faster and st...