So that was the Nokia C7-00 after all. It took half a dozen of leaks but the identity of the leaked Nokia prototype is finally confirmed. And what's even better, most of its specs got confirmed too so we know what to expect.

Nokia C7-00 will run on the latest Symbian^3 operating system and, as previously rumored, will pack an 8 megapixel autofocus camera. Its capacitive touchscreen will stretch over 3.3 inches and will feature the usual for Symbian handsets nHD resolution. There is also support for multi-touch gestures mentioned. 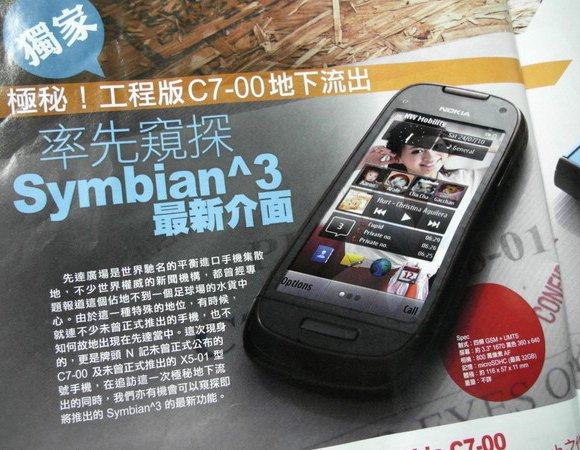 The leaked Nokia C7-00 ad also confirms a microUSB port, a 3.5mm audio jack and 720p video recording. 3G radio and microSD card slot for memory expansion are also present inside the slim 11mm body of the handset. It all adds up to a trimmed-down version of the Nokia N8, which should provide a nice Symbian^3 alternative to the mass-market.

With the press materials all ready to go, we suspect that the Nokia C7-00 announcement can't be far away now. Its release will probably come after N8 hits the shelves so Q4 sounds like a realistic release schedule.

what ever you say, N8 is the nice and sturdy bult N series phone ever to hit the market.

Is this the one for me? Probably. The N8 is nice to have, but could be quite costly.