Next WebOS smartphone by Palm to be called Palm Eos

Seemingly designed as a successor of the Palm Centro, the rumored next WebOS device by Palm has finally received a name and a face - enter the Palm Eos. At only 10.6mm thickness the QWERTY-equipped handset packs quad-band GSM support and dual-band HSDPA (more or less its US flavor frequencies).

The Palm Eos has a 2.63-inch capacitive touchscreen display with a resolution of 320 x 400 pixels, 4GB of storage, and a GPS receiver. The final touches on the specs sheet include a 2 megapixel fixed focus camera with a flash, stereo Bluetooth (A2DP) and a microUSB port. 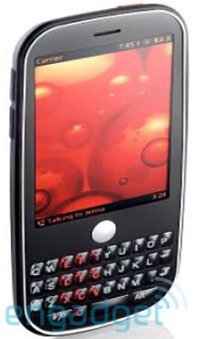 The Palm Eos should be announced for AT&T in the US at a price of 350 US dollars before any rebates. And since perhaps we didn't make ourselves clear up until now, the Eos is still a rumored device - though all the information seems rock solid.

i professionally check bills of mobile callers , I think only roughly 0.2 percent of all callers sends mms , and then usually 1 or 2 a month..... practically nobody

Hey look - a Blackberry Bold... well, at least the image seems to suggest that.

Of course, I would prefer 8mp. I said that phone cameras must be at least 5mp. :) As for "less resizing", who cares? Eh? :)) No practical difference whether scaling down from 8m or 2mp. I am always wondering why some people seem to be willing to...