The LG Nexus 5, which was released back in November 2013, has started receiving the Android 5.1.1 update in India. The over-the-air (OTA) update weighs in at around 24MB and carries a build number of LMY48B. 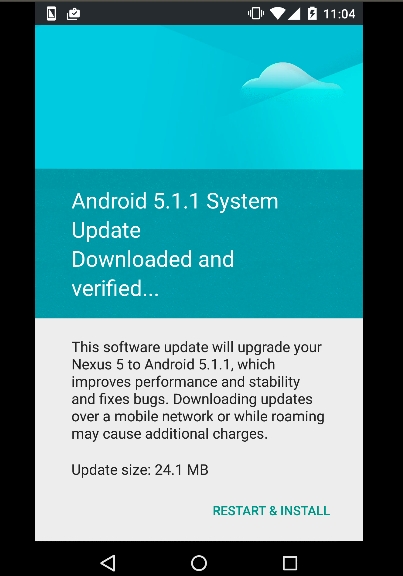 If you haven't received it yet, you can manually check for it by heading to Settings -> About -> System Updates on your device. For those who aren't already aware, the Android 5.1.1 update isn't a major one, as it is primarily aimed at fixing bugs and improving performance and stability.

This comes just a few days after the update started rolling out for the LG G Flex2 in Korea.

My nexus 5 asks to remove over laping of apps. How to do for working of all the aps.

Hi, After Nexus 5.1.1 upgrade I am also facing the same issue. Phone is going into google image loop. Could you please provide the solution to this. Thanks, Gaurav

Have problems after 5.1.1. reboots any time - keeps rebooting in a loop . on and on If you are lucky it may start up and start optimising your apps i have 150 .. it takes some time My advice Dont upgrade