The Nexus Sailfish is out and about again, this time, it stopped over at AnTuTu. The smaller of the two upcoming Nexus phones confirmed the specs we saw from its time at GFXBench. 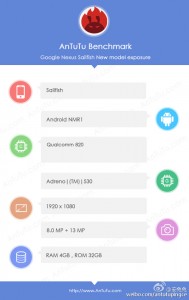 The camera setup of Sailfish has a 13MP (or is it 12MP?) camera on the back capable of 4K video recording plus an 8MP selfie cam (seemingly capped at QHD video) on the front.

We have seen some mockups of the "Nexus 5P," the alleged retail name of Sailfish, but we're not sure of their authenticity. By the way, Marlin will be the bigger Nexus with a 5.5" screen and similar specs.

Out of all the Nexus devices only the very first one had a micro sd slot (Nexus One), you really think they're going to incorporate it now? Lol i doubt it.

I thank God every day that I live in 'Murica lol