Hot on the heels off an appearance on GFXBench flaunting a Nexus 6 name alongside its Motorola Shamu codename, it's now time for AnTuTu and we've got more details.

The Motorola Shamu will not be opting for a Snapdragon 801 chip with Adreno 330 but rather the next big thing from Qualcomm - a Snapdragon 805 chipset with a quad-core Krait 450 processor working at 2,65GHz, 3GB of RAM and the Adreno 420 GPU. 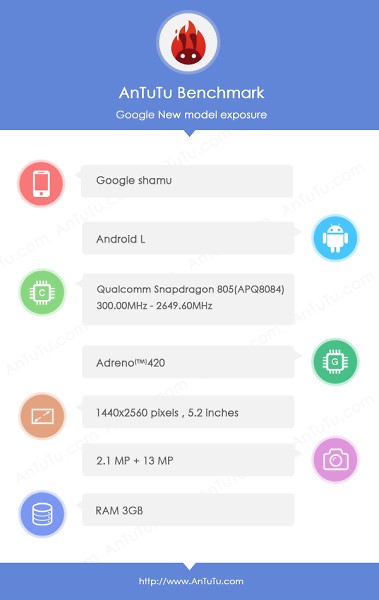 AnTuTu's database has the device under the name Google shamu, which seems to solidify the rumor that this will indeed be the Nexus 6. The device carries a 5.2" QHD (1,440 x 2,560 pixles) display with around 564 ppi for unmatched sharpness.

The camera on the back will be a 13MP unit coupled with a 2.1MP one for the front. Finally the Shamu will be adorned with Android L for good measure - adding even more fuel to the Nexus fire.

Hopefully we're looking at an announcement soon at some fancy Google event where all geeky eyes will be on the search giant to refresh the very popular, but now aging Nexus 5.

Guys everuthing looks great for now. But do we know the size of the battery? Its a rather important matter! The truth is I got a bit dissapointed when i found out that Motorola is the manufacturer this time. I suppose time will show

Please do it with LTPS or IGZO screen