The Samsung Galaxy Note 4 packs a 16MP image sensor sitting behind an f/2.2 aperture, while the Motorola Nexus 6 has a 13MP sensor and a wider f/2.0 aperture. Both are optically stabilized but the sensor in the Samsung phablet is widescreen (16:9 aspect ratio), while Motorola used a standard 4:3.

The optical stabilization should help with low-light performance, but the Nexus 6 has a lead - the wider aperture, but also the dual-LED ring flash. The Note 4 has only one LED.

For selfies, the Galaxy Note 4 has the clear lead with a 3.7MP camera (matching the QHD screen's resolution exactly) and f/1.9 aperture. The Nexus 6 has a standard 2MP shooter.

In terms of software, both companies have their own camera. The Nexus 6 runs the Google Camera by default, which includes HDR+, Panorama and Photo sphere plus Lens Blur. The UI is minimalist and relies on pulling out hidden elements with edge swipes.

Samsung's camera offers more shooting modes, several of which are hidden by default and you can download more as needed. This camera offers a more standard menu-based system though it has been greatly simplified from the feature-overload of previous Samsung designs.

We'll try out some of the individual modes to see how they perform.

That's it for still shots, video recording on both phablet maxes out at 2160p at 30fps. The Galaxy Note 4 disables stabilization at this resolution though.

Samsung does have high frame-rate modes, 1080p @ 60fps and 720p @ 120fps, while the Nexus 6 shoots only at 30fps. The smoother motion enabled by high-fps modes can make a great difference in fast-paced scenes, plus you can try slow motion effects.

The advantage in selfie photos of the Samsung Galaxy Note 4 extends to video too, it records at 1440p. That's the middle step between 1080p and 2160p and exactly four times as many pixels as the 720p video that the Motorola Nexus 6's front camera manages.

Winner: Samsung Galaxy Note 4. Selfie cameras are a new battleground for phone makers, but a hotly disputed one and the Note 4 easily wins this round. It also offers high-fps video modes, which can be vital for some scenes. It also packs more camera options out of the box.

The Motorola Nexus 6 has the interesting ring flash, though two LEDs are not quite enough to win a crown. The Acer Liquid S2 had four LEDs in a circle, for example.

We mentioned the difference in aspect ratio, the widescreen Galaxy Note 4 camera vs. the more traditional 4:3 shots of the Nexus 6. Laying photos on top of each other we find that the Motorola has a fairly wide lens so if you put it in 16:9 mode it will capture almost the same width of the scene.

This comes at the expense of resolution and the Nexus is already at a deficit. The Galaxy Note has more pixels to cover the same objects, which will give it a boost in image detail. We collected crops from several of the photos we shot with both phablet. As you can see, things appear larger in the Galaxy Note 4 photos because of how resolution and field of view balance out. The top row makes it easy to compare color rendering (it has the three primary colors) and sharpness (with black on white text).

The Samsung camera clearly boosts the colors a bit, not as much as it has historically but it's still noticeable next to the Motorola camera. You can see it also pumps up the contrast, which makes the black on white text pop more and the red logo more defined.

The colors in the Nexus 6 image stay closer to reality and white balance is more accurate (the Note tends to go a bit warm). The image also looks less processed overall, without the contrast boost and extra sharpening that Samsung does.

The second row shows the rough texture of a stucco wall. It's a challenging texture for digital cameras as its complexity can be mistaken for noise and removed from the image, which seems to be what's happening with the Nexus 6 shot. There's still some detail left, but a lot of it is smoothed over. The Galaxy Note 4 leaves a lot more of the detail in.

The third row shows the transition between shaded and sunlit parts of the building. Both phones show good dynamic range in this difficult transition with little in the way of overexposed or underexposed areas, no loss in detail or a spike in noise.

After dark, we went to take a few more shots to see how both cameras do in the dark. To make things easier to compare we adjusted the exposure compensation until we got as close as possible to the same shutter speed and ISO setting. 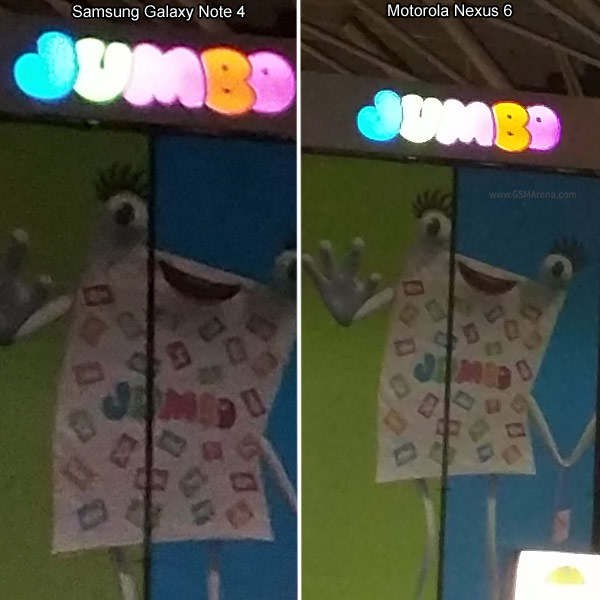 In this particular shot that meant +0.5EV on the Galaxy Note 4, while the Nexus 6 was left at 0EV. The result is 1/17s and ISO 320 for the Samsung and 1/20s and ISO 294 for the Motorola. Both of those can rely on optical image stabilization, but it's good to see they don't drop the shutter speed too low.

That would blur any moving objects and is good only for static scenes. The results are pretty similar give or take and we can't pick out a clear-cut winner in this department.

Here are the full resolution photos used to make the crops above.

Winner: Samsung Galaxy Note 4. The Nexus 6 still camera has a lower resolution sensor and still manages to keep up to the Note 4 in a lot of respects but in the end of the day, the Note 4 camera did equally good or better in most tests, so it gets a well-deserved pat on the back. Both offer an excellent all-round performing still camera.