Both phablets feature built-in HDR modes, which can be invaluable when shooting against the sun or the bright overcast sky. This sort of scenes is quite taxing on digital cameras. 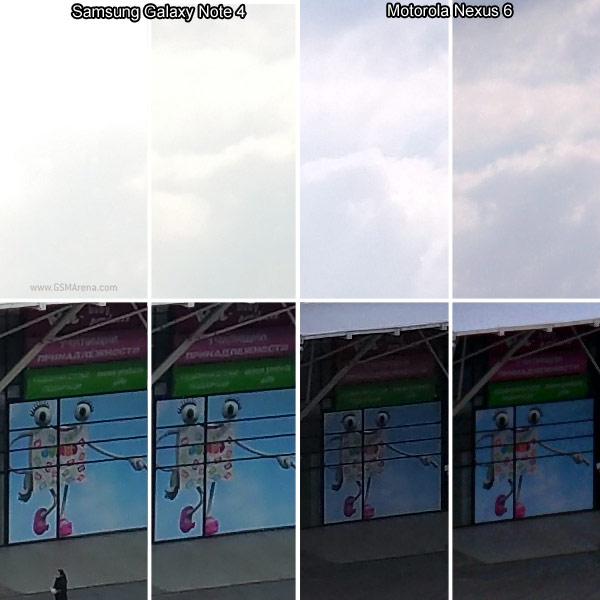 The Samsung Galaxy Note 4 let the sky overexpose, but the areas in the shadows look quite good. The HDR mode works with a very light touch, bringing in some more details into the white clouds though the sky remains overexposed. The shadowy areas look pretty much the same.

The Motorola Nexus 6 paid more attention to the sky and the ground in front of the buildings (which was in the shade) and ended up quite dark. Enabling HDR rendered a nice blue sky and the clouds look great, though the ground was only marginally lit up. Also, noise increased slightly.

Winner: Samsung Galaxy Note 4. An impressive-looking sky can improve any picture, but if we had to pick, we'd go for mode that brought back more detail in the ground than in the sky. The Galaxy Note 4 does a good job without HDR, while HDR gives it a helping hand in developing the highlights better.

The Motorola Nexus 6 does the sky justice, but can benefit from a boost in the shadows.

Image processing is more important than camera resolution when it comes to panoramas. Here both phablets produce more or less the same resolution. The Galaxy Note 4 shot is around 3,100px tall, while the Nexus 6 is around 2,600px.

There are no visible stitching issues in either panorama. The Samsung panorama is sharper, though a lot of that is due to sharpening post processing. The Motorola Nexus 6 offered better dynamic range, handling the sunlit areas and shadows better than the Galaxy Note 4, which both overexposed bright areas and left the shadows darker.

Shooting a panorama with the Note 4 is simpler, just start swiping left or right. The Nexus 6 process is more involved as you have to aim for virtual targets and you have to hold for about a second on each.

Winner: Motorola Nexus 6. Despite the resolution disadvantage, the Nexus 6 offered competitive detail and issue-free stitching. But that's not why it won, the higher dynamic range is very important for panoramas, which due to their wide nature very often include dark shadows and sunlit areas.

The Samsung Galaxy Note 4 panorama is sharper out of the box and easier to shoot. Samsung panoramas have suffered dynamic range issues for a while though (the Galaxy S5, for example).

Both cameras can digitally play with the depth of field and the focus point, an effect that has gained a lot of popularity lately. It's all digital trickery as neither phone offers control over the aperture, but on the up side you can readjust the effect after the fact.

The Samsung Galaxy Note 4 takes a couple of shots, so you have to stand still but it's done pretty quickly. The Motorola Nexus 6 asks you to move the phone up a bit, similar to how a panorama is shot.

When you're done the Note 4 offers just three settings - near focus, far focus and everything in focus. The Nexus 6 lets you move the focus point around and adjust the strength, which offers more flexibility but the effect looks like you selected a circular mask and then hit the blur button.

Despite the simpler shooting process, the Galaxy Note 4 was more accurate when performing the effect. The resulting image has flaws (DSLRs can breathe a sigh of relief), but the Nexus 6 is quite good nonetheless. Also, the effect fails to underline the perception of distance as you can't really blur only nearby or only faraway objects.

The processing done by the Google Camera is done at lower resolution, 3MP, while Samsung works at full resolution. A word of warning: the Galaxy Note 4 images are usually 20MB or more in size, since they contain multiple 16MP shots. This allows it to readjust the effect after the fact, but it can cause headaches when sharing these shots.

Near focus • far focus * all in focus

Winner: Samsung Galaxy Note 4. Simpler to shoot and simpler to control, the effect is more accurate to boot.

The Motorola Nexus 6 shots seem more like a quick Photoshop job than something processed from multiple frames. And the resolution is too low, Snapdragon 805 can surely handle 13MP processing without breaking a sweat.