Shooting 2160p video eats up storage pretty quickly, a relatively short 30s clip can turn into 150MB a file easily. That's due to the high bitrate - 48Mbps for the Galaxy Note 4 and 42Mbps for the Nexus 6. A small fragment of that is the audio.

You can watch the individual videos on YouTube or download short samples here, but we prepared some crops like in the still photo chapter to illustrate our findings.

The Samsung Galaxy Note 4 videos are noticeably sharper, more so than can be accounted just by the bitrate difference. Their colors are still oversaturated and the image looks overprocessed.

The Motorola Nexus 6 earns some points for the better colors and white balance, but the Samsung has a clear advantage in dynamic range - the sunlit areas in the Motorola video are badly overexposed.

The Motorola Nexus 6 camera refocused too often and there's a noticeable shudder as the cars whizz by, while the Galaxy Note 4 kept the focus stable for the entire video.

The difference in sound goes strongly in favor of the Galaxy Note 4, which produces richer sound. Stereo also lets you follow the cars as they move past, while the Nexus 6 audio is less engrossing. 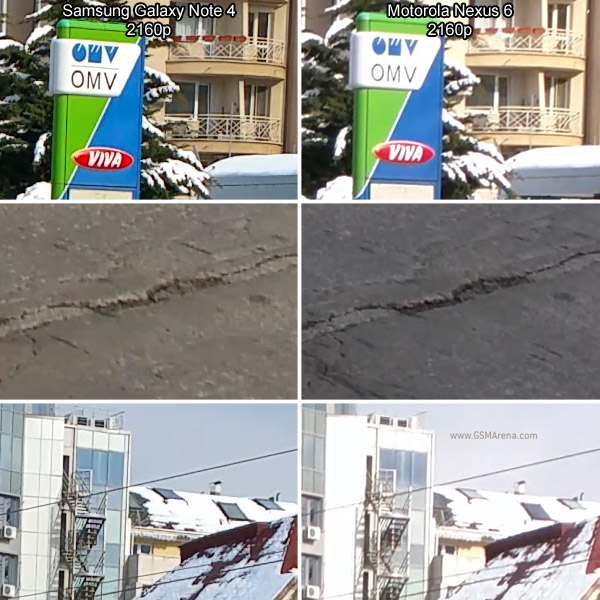 For now most users will probably stick to 1080p. At that resolution both cameras shoot at 17Mbps total bitrate with the same audio bitrate as the 2160p videos. 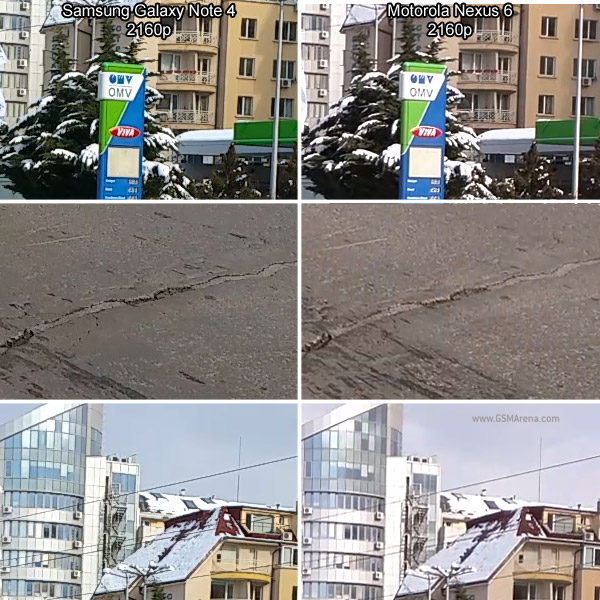 You can watch the videos below, or download one of these videos:

Winner: Samsung Galaxy Note 4. We already gave it props for the high-fps video modes, but it also offers sharper videos in 2160p mode. In 1080p mode things are much more evened out, though sound recording is a definite win in favor of the Galaxy Note 4.

The Motorola Nexus 6 has less dynamic range when shooting video and following Apple in shooting mono sound did not pay off. The trigger-happy continuous autofocus did not help its case either.

We strapped the two phablets together and pressed Record, so that each camera will have to deal with the same amount of shake while we walked around. The Motorola Nexus 6 did a better job of smoothing out our footsteps, the camera floating in the air.

The Samsung Galaxy Note 4 also managed to conceal individual steps though there's more jerkiness visible in the video. Even standing in one place and panning from side to side some handshake manages to sneak into the Note 4 footage, while the Nexus 6 stays on target.

Winner: Motorola Nexus 6. It does the better to stabilize the video when walking and works just as well on 1080p and 2160p.

The Samsung Galaxy Note 4 OIS+EIS combo removes the worst of the shaking caused by walking and unsteady hands, but videos could have been a lot smoother. At 2160p you only get OIS, which makes the videos even shakier.