Nexus One fully spec'ed, will be 'invite only' first, for T-Mobile later

If Google aimed to build up hype for the Nexus One, then they've done a good job. Now that we have the complete specs, we think that the excitement around the phone will be just beginning to grow. But getting your hands on a Nexs One might be a problem, at least at first.

Here's the lowdown on the specs - the Nexus One is running Android 2.1 on top of a Snapdragon CPU clocked at 1GHz, with 512MB RAM and 512MB ROM. The screen is a 3.7-incher AMOLED capacitive touchscreen with WVGA resolution (reportedly, there's no support for multitouch). 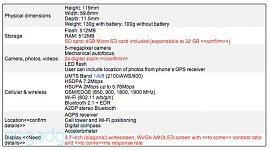 Here are the specifications for the Nexus One

The Nexus One has quad-band GSM/EDGE support and 3G with T-Mobile frequencies (900/1700/2100). The 3G comes in 7.2Mbps HSDPA and 5.76Mbps HSUPA flavor. The rest of the connectivity options are duly covered as well - Wi-Fi, Bluetooth with A2DP, GPS with A-GPS and a digital compass and finally a microUSB port.

The phone is well equipped for multimedia as well - a 5MP autofocus camera with LED flash, 4GB microSD card in-box with support for up to 32GB cards, H.264 video decoding, and a 3.5mm audio jack. And of course the big AMOLED screen of the Nexus One should make for a great viewing experience. 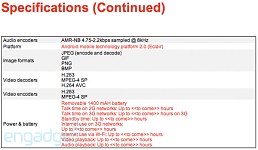 The physical aspects of the phone are quite enticing as well. The Nexus One measures in at 119 x 59.8 x 11.5mm and weighs 130 grams with the 1400mAh battery. The back cover is Teflon-coated (think HTC Hero) and there's a second mic at the back of the phone for active noise cancellation.

A reminder of what the Nexus One looks like

There are some more interesting nuggets of information - in addition to Cell-ID positioning, there's "Wi-Fi positioning" (something like Skyhook like on the iPhone's Maps app maybe?) and the trackball serves as a notification light with a tri-color LED glowing under it.

So, it all sounds like an Android fanboy's dream but getting your foot in the door as an early adopter might be a challenge. To get the Nexus One you'll need an invite, just like all beta Google services upsofar.

Typical Google however, rumor has it that T-Mobile USA will be getti9ng the phone as well some time in the future. No one knows when exactly but when the "beta" period of the Nexus One runs out, you should be able to get it through normal (read non-EBay) channels.

I know a few people who video conference. It's great if you have kids and can't be home or at an event for some reason, or a party they're going to. ...and yes, I've been video conferencing on my phones for over six years.

if those specs are correct and it has a 16 million colors display i will buy it instead of x 10 :)

can someone tell me the difference between NexusOne and HTC BRAVO, are the identical or there is some difference? thanks all