Nielsen totals for 2012 see Google dominate the US

The Nielsen Company, one of the global leaders in consumer market research and trend analysis, has released its Nielsen Tops of 2012 report, which looks at the top Web and mobile companies between January and October of 2012. 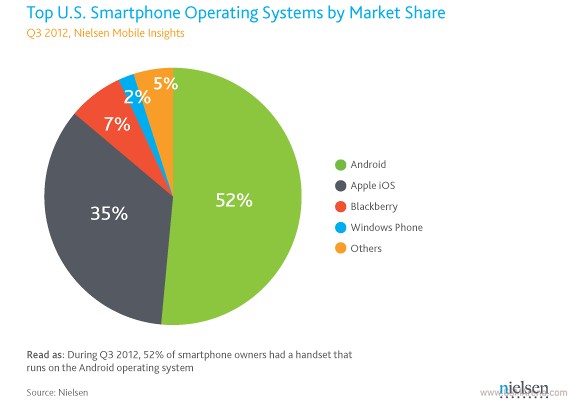 On all fronts, Google was able to maintain its position at the top of the mountain.

Starting with Smartphone market share, Android continued to hold more than half the pie, despite Apple's all-time-high sales share for the three month period ending on November 25.

In the app realm, Google understandably takes four of the top five spots, which is nothing remarkable as Google preloads those apps on most of the Android devices.

For iOS it’s the infamous Maps app which takes up the first spot, although likely not many figures represent their recent fiasco as the data is only until October.

Android dominates the market numbers because there as a bucket load of manufacturers and 100's if different phones to choose from....which is good, don't get me wrong, choice is great. But half of them are $100 or below and are cheap tack. So don't g...

what like apple?? we are not sheep we don't like android for whatever reason u are obviously thinking i like android cuz its open to development that means its ever evolving and is more current that LOCKED DOWN IOS i don't like being told what i can...