No plus: OnePlus 8T is getting the vanilla S865 chipset, OnePlus Watch and power bank certified

The OnePlus 8T is making the rounds and collecting the necessary certifications and some info leaked out in the process. It seems that the phone will use the vanilla Snapdragon 865 chipset, just like the current OnePlus 8 (previous T models upgraded to the Plus version). 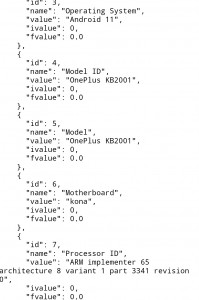 CPU details for the KB2001 - most likely the OnePlus 8T

Earlier, the 8T passed through Geekbench running Android 11 on 8GB of RAM, but that left inconclusive evidence of which chip is used. While it will be powered by the older chipset, the T may upgrade to a 120Hz display.

Also, the camera department should be more reminiscent of the 7T, featuring a tele camera (8MP). That's not all, the main module is expected to switch to a 64MP sensor (up from 48MP).

The 8T duo may be the first OnePlus phones to support 65W fast charging. If that’s the case, we should see a certificate for the new power brick soon as well.

Besides the 8T, BIS also certified what appears to be the OnePlus Watch as well as a power bank. The watch will be round, unlike its Oppo Watch cousin (and may be similar to another cousin, the Realme Watch S Pro). Unfortunately, BIS is more secretive than the FCC, so we don’t get any photos or specifications of either device.

A bit of OnePlus trivia: the company released its first power bank in 2015 and also had plans for a round smartwatch that year (Carl Pei tweeted design sketches). However, the watch project was mothballed.

I loved my op3t capacitive buttons, headphone socket, flat screen. Till I smashed said screen then needed an upgrade so went for the 7pro, which I love but it's a bit too big, the curved screen gets tapped far too often

Still using OnePlus One... some time ago I decided not to be a part of the consumerism... and I've waited. I had big hopes for Nord, but in my opinion OnePlus failed to deliver. Some years ago they lost their way of making budget flagship &quo...