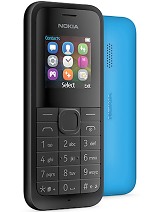 This is the phone that started all the Gameloft games that only let you play the game for 5 free trials before having to buy it. Games like Ninja Up and Sky Gift.

Sunil, 17 Jul 2018Iam using this phne frm 2014 it has nice battery packup and easy to handle Can you tell me where is the options of sims from which i can make load?

Why does this have demo games? The original Nokia 105 didn't have any. :(

Hello,anyone can give the correct information about headphone, does it work with phone calls ?

I love the ringtones and the instruments for the ringtones used on this phone. My favorite ringtones are Nocturnal, Coconut, Seahorse, and Brikabrak. Love it! I don't care about the 2011/2013 (whatever year the original was released) version as I hate the ringtones on that version.

this is my phone for calling and texting., because im using tablet for facebooking and youtubeng.

easier to use than smartphone.

Omgmadphonegurl, 15 Nov 2016Terrible for a real phone!!!! Sucks that it doesn't have a camera...People buy this for calling and texting purposes only, and it is far way better than a phone having only 3mp camera or less becaus 3mp is nothing nowadays.

AnonD-599897, 19 Oct 2016does this phone have front speaker?or just single speaker which works for both call and loudsp... moreNo it has a separate loudspeaker

A friend of mine is using this phone- Nokia 105(2015) and he told me that it is an extremely good phone with nice loudspeaker.

Terrible for a real phone!!!!
Sucks that it doesn't have a camera...

ZH, 29 Jul 2016I'm using it as a back up phone. One thing I can say that it's call quality is very good and l... moredoes this phone have front speaker?or just single speaker which works for both call and loudspeaker??