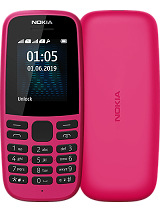 Works fine but I get two squares whenever somebody tries to send me an emoji. Not sure how to fix that. There's no conversation view (nor screen space for that...). The battery charge lasts probably a week with low usage. I'm not a big fan of the central button (directions + ok) because you need to be somewhat precise to land every keystroke. I'm not sure there are ways to configure what each specific button does because that would be awesome. It's a decent phone, overall.

I’m not even here to complain about much. Has anyone figured out the predictive text yet? It’s really bugging me😭😭😭

is it have speed dial

Before buying consider
Not good as previous Nokia 105(2013)
• "No themes! "
• Fonts in contacts/messges are "small and hard to read".
• There are "Few Ringtones" (not good)
• Wallpaper provided well ...su*ks!
• D pad controls are aquard!(Accidentall "ok" presses)
• User interface looks like one in cheap knock-off phones!!!👎
• Speaker is not loud enough.

Not a good replacement for previous Nokia version, still getting to understand it and how would you expect me to pay to play those wack games?

Anonymous, 21 Dec 2019There is a problem saving massages in draft.when I try to save massage in draft it says that ... moreWorst nokia phone i have ever bought. The phone should have come with similar features as nokia 107 (2013). The phone is packed with unneccessary stupid games. Call logs keep jumping when trying to toggle between called, received and missed logs. Even saving message to draft is always with a prompt of 1 message out. What a scam phone from nokia.

There is a problem saving massages in draft.when I try to save massage in draft it says that 1 out of sent

Does this phone includes a 3.5mm headset?

f82, 30 Oct 2019I just bought a Nokia 105 (2019) to finally compare it to the 2017 one; these are only final u... moreI find this phone infuriating, for the very reason you mention. I can't find further underlined dictionary words or a spell option as you would usually with the * button which renders predictive text relatively useless - am I missing something? Any help gratefully received.

Also it does not tell me, except a very brief flash on the display , that my message box is full.

Hasi, 11 Nov 2019I brought Nokia 105 (2019) phone few days back.. But it doesn't feel better like Nokia 106 mod... moreI imagine that some things may be fixed/improved with future firmware versions but probably only available when installed into new phones that will be sold in the stores. Just like the latest available Nokia 130 in EU stores having the "file browser" app, I've never seen before myself in the older firmware versions (for this country version) until some months ago.
I've been using the 2017 and 2019 versions for a while now and while both are good solid phones, I may still prefer the older 2017 model for the same impressions I had at first. I prefer the 2017 for display quality, plastic case shape feeling, dictionary (still can't understand how to change the available words but need some feedback on it) while I may prefer the 2019 for more modern design, maybe keypad feedback, I'm not sure but also battery life and charging time felt improved.
About the display: in my 2019 version the TA-1174 Made in Vietnam black plastic color, the differences compared to the old display are mostly in the vertical/horizontal "blacks to black-greys" color shifting/contrast ratio, when changing the inclination point of view, generally feeling less contrast ratio but the 2019 may feel a bit brighter overally. Beside the phone still remains good, the older 2017 TA-1034 Made in Vietnam display seems to feel from a technical point of view a bit better.

I brought Nokia 105 (2019) phone few days back.. But it doesn't feel better like Nokia 106 model. There isn't a option to change theme in 105.. This highlight orrange colour tired the eye Other version had plain blue color. Thought the display size is much larger than the previous version , the font size in messages and contacts are small , and hasn’t a way to change the font size.. In message when we need the details of received msgs like received date or sender , it can’t get it by scrolling down.. It should see by going to the msg options... These facs irritates me on Nokia 105(2019) model. But I love my previous Nokia experiences.. Is there any way to fix that patches?

I have a Nokia 105 (2019) it is very good mobile phone,it can be purchased in single sim edition or dual sim edition,for more details use this that I have found on youtube https://youtu.be/4ZvV8KygQlw

I just bought a Nokia 105 (2019) to finally compare it to the 2017 one; these are only final user initial feelings/opinions that may change during the next weeks using it.
I found it at the same price of the 2017 one I have, no price cut found.
I like the new "modern" look, I don't like the new "brighter" black color palette. The plastic feels ok while feeling a bit on the cheaper side. Maybe having a bit sharper angles between the two cover sides, the 2017 felt a bit softer/rounded and better shaped for the hand. The keypad separated main buttons solve the 2017 "empty" center point, the D-Pad button seems a bit more precise but flat; buttons sound feels the same; the two side buttons near the display feels a bit harder to press.
The display beside the size difference (1,77" of the 2019 vs 1,80" of the 2017) not easy to notice, has not better points; the contrast/viewing angles has changed and the 2019 one, while seems to be brighter, looks like having way brighter black levels too, lower contrast ratio and lower viewing angles. The icons/theme color change seems to compensate it but clearly visible with just the clock or at the boot/shutdown.
Voice from the speaker seems just as ok as the old one, (I only tried the operator call), ringtone quality feel lower maybe but louder.
On the firmware side, date 08/2019 version 20.x, generally the menu speed feels a bit slower compared to the 2017, probably sign of a slower clocked cpu. Maybe just milliseconds but it can be felt from a fast main menu icons movement or a fast locking/unlocking the screen using the "shutdown" button. Software seems having same features, I just noticed the different font size on the sms and a strange thing I still have to understand; using the dictionary I can't find a way to change the underlined sms words using the "*" button as before. I tried the "*", "0", "#", "up" or "down" buttons; now the old "*" button show the symbols page. I'll wait for other user feedbacks but this may feel like a software bug of this firmware version, hope I'm wrong.
So at last, while there seems to be some things may be changed we must consider this being the lower end market phones and if I had bought it for like/less than 20 euros I'd be happy with it, explaining the price change, but for the same price maybe I can't see enough reasons to not look for the 2017 model.

Jaiden, 19 Oct 2019Whatever. The 2017 model is still better. Using a different chipset and having a cheaper build... moreIf a product become cheaper at every new release of course the previous model may have been better. I agree the 2017 version was a good version but from my point of view instead of trying to save a bit on the product price at each release they should try to improve something even if getting a bit more expensive.
For example a better keypad like the 130 model or a better screen with higher brightness. Lately after not much time of usage my 105 (2017) version flash led stopped working without any reason. Not a big problem I wasn't using that often, but that's the point. Getting cheaper at any costs may means this things happening.

f82, 16 Oct 2019It's not impossible they maybe went for an alternative chipset having similar but a bit differ... moreWhatever. The 2017 model is still better. Using a different chipset and having a cheaper build quality (compared to the 2017 model) is a huge downgrade.

Jaiden, 02 Sep 2019It is actually a downgrade to the 2017 model. The 2019 model has a way worse MIDI sound chip m... moreIt's not impossible they maybe went for an alternative chipset having similar but a bit different features many feature phones already had. The Nokia 110 specifications page seems to already confirm the chipset changed so it may be probably the same for the other similar phones. These feature phones, at any new release, try to mantain same/similar features while getting even cheaper and to get that some changes may be done. For example the keypad or plastic or display quality may be or not, exactly the same.

Pirate, 01 Oct 2019Does this phone runs on KaiOS? If so, is it possible to run What'sApp on it?No. It should run the S30+ "operating system" and considering it should not have any online data internet connectivity why expecting more; it's the lowest-end market sector for people who needs only 2G calls, sms, FM radio and some games. It's still not clear if they changed the hardware inside that may be similar to the new Nokia 110 (without its camera/music player obviously).

Does this phone runs on KaiOS? If so, is it possible to run What'sApp on it?