Nokia 1 Plus - user opinions and reviews 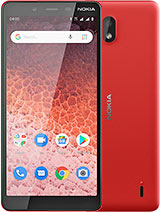 The update to Android 10 appeared out of nowhere, and screwed up my phone big time. I so prefer the previous OS. Google is shitty.

Before android 10 update Nokia 1 plus is a best gaming phone.but after android 10 it's too slow.Dont update any update without knowing about it

Android 10 and a decent SD card make this a very respectable basic phone, With prior versions of Android it struggled with even the most basic tasks, Truly amazing for such a low price point..... Just don't expect too much. Don't load too much unnecessary software or try to do too much at once

Better to buy a used faster phone instead of this. Its real slow, Android 10 does not make it faster. Notifications are broken, the battery discharges while charging and in use as well as the device gets super super hot.

I bought one for $52 AUD (new) and it services my needs. I don't take photos and rarely use it for FB. It is a great utilitarian phone, and will not disappoint as long as you don't expect the same features as a phone costing 20 times as much. As a Nokia, battery life and general reliability are exceptional. I charged it 26 hours ago, download apps and updates, and are still at 93% battery capacity. If nothing else, Nokia can really make a great (replaceable) battery

The Android 10 update makes the phone a lot more responsive and much much easier to use. On 8.1/9 it would sometimes freeze when unlocking times or when a call came through and struggle to do some basic things.

That is all in the past now. Everyone complaining about how slow the phone is needs to update to Android 10 or find another phone. It's only got 1GB of RAM and 8GB of storage, so expect slow downs when you have a lot of apps open and have used up most of your internal storage. You can get a fast class 10 microSD and use that as shared storage if you need more space.

If you looking for a budget phone, just to make calls, use messenger apps and take a photo or two, with Android 10 suppor then this is for you.

Bought and used Nokia 1 Plus for several weeks and all I can say is I'm very disappointed.
It is not up to current standards. In fact I had an earlier Nokia purchased back around 2008 that was a far better machine in EVERY way except that it won't work on 4G.
I most certainly will purchase a replacement but it won't be a Nokia. Sad really.

lindokuhle, 20 Oct 2019Hello I need help, my Nokia 1plus android is corrupted and I don't know how to fix it. PLEASE ... moreDude if you've bricked it then it's done You gotta be careful with phones OS'es

fotos come out negative on the screen when someone calls me I cant pik up need to call back
a snail is faster.

Naveed, 11 Mar 2020I've been using Nokia 1 Plus for around 6 months and this has to be one of the best budget pho... moreDo we need a screen protector glass?

I've been using Nokia 1 Plus for around 6 months and this has to be one of the best budget phones ever. The camera is a bit slow to load and takes around 2 seconds to open up but picture quality wise it does the job. Install SD Maid and Droid Optimiser as it sure does speed up the phone by removing those junk files Clean pure Android Go Pie Edition is so snappy. It has 4G so it is better than Nokia C1 which only has 3G. 3D Gaming performance is acceptable as Asphalt Extreme ran smoothly in medium settings while other 2D games ran flawlessly. Got it as a replacement for my stolen Moto E4 as I was short on cash but now kinda love it. Waiting for Android 10 update. If you are short on budget then this is the one to go Hands Down. oh Did I mention those removable Covers in Cool ablie and Shocking Red. Best Budget Buy Winner Phone...Nokia Rules

worst phone in my life i buy nokia 1 plus when i buy phone then starting hanging problm just help me , befor also im using too much 1 Gb ram phones but only nokia 1 plus cheated only display its good for money . how can i solve my hang problm help with requesting

brought phoine for 70 euro is that good

Great phone for people with a small budget. Nokia C1 is etter however so better go for that. Or when you need pocket friendly phone, Nokia 1. Nokia is king I love their phone I am using 7.2 amazing device.

The foot, 16 Jan 2020Crap slow ...worse phone I ever owed..i bought it new and it was crap then and still crap now.Me too. Slow, hangs, the android go apps are actually even a hindrance on this monster. It keeps asking if I would recommend it to a friend. And I keep saying definitely not.

Rooney, 23 Aug 2019This phone has more cracks in it than the grand canyon and the ghettos in LA after just one mo... moreThere's nothing smart about this phone don't buy it simple...apps open on own and slow the app your using down...you shit all apps wake up in morning to no data as 6 apps been on all night...rubbish slow and useless

Total of 158 user reviews and opinions for Nokia 1 Plus.
ADVERTISEMENTS