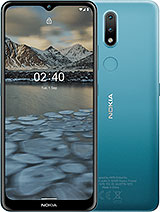 Anonymous, 11 Sep 2021Having the same issue since the very first week I bought the phoneIm also having the same problem nokia 2.4

Cykosony, 06 Sep 2021samsung a21 i have now and motorola one 5g ace..both double the price..im literally doing the ... moreWeyrey Ni boy yi sha.. you make fun of my written English yet you clearly have spelling problems while I on the other hand speak three major Nigerian languages plus English and French. I digress. GSMArena created a platform for users to post their experiences with any phone featured, I bought a phone with my hard earned money and it's not satisfying me yet you say I should keep quiet, you call me a "bot". Is something wrong with you ? I don't blame you sha, an apple will never fall far from its tree.
By the way, my first choice before getting this useless phone was also a Sony but they don't have official presence in Nigeria so are extremely rare except I want to buy a used version

This phone is TERRIBLE. Nokia should be ashamed for selling this substandard nonsense. It freezes up, skips music tracks and changes Sirius XM channels without being touched. It will not connect to either of the cars we own with Nokia branded accessories. This will be my last EVER Nokia purchase.

diksman11, 09 Sep 2021One of the best phones I have ever used, Screen, battery, speed everything is too good, Ca... moreWith 2gb??? That's a little bit hard to believe in that because I have a pal that own a 3.4 with 3gb ram and ot has some stuttering and frames drop

SteveTheJust, 15 Aug 2021Nokia is the king of display and audio in smartphones . The king of all the time.B.s. nokia has no proprietary display like ips which originated from LG and super Amoled and Dynamic Amoled by Samsung

One of the best phones I have ever used, Screen, battery, speed everything is too good, Can't resist myself from posting this review as I like it a lot 👌

ChiefTimi, 01 Aug 2021Oga, who wants to hire someone like me ? I'm in Nigeria and we don't have return pol... moresamsung a21 i have now and motorola one 5g ace..both double the price..im literally doing the comparison nkw..the samsung is the slowest and hardest to perfkrm mutiple tasks...tje nokia works just fjne..and for 130$ moto's 6 an d other cheapys cant compete though motorols probably has the most variety of mid lev e l phones. bc they all are..but cost a l ot more than nokia when you fairly compare apples to apples specs...id say between the 3 and bei g the nokia is half their price..hands down winner...theres nothjng wrong with the brand...there may be 1 local signal disruption...you may have a virus or bug right off thr bat...you may be a clown bot who strangely most of the complaints have a very poor command of english..if thats how you communicate in counrry of residence ...
then i dont trust your opinion on whether you know what your doong with any device that runs on electricity...or whether your value system can be trusted..if you tend to make sweeping accusations and complaints without gather i ng all the facts first....
but dont look at me im a sony guy .thry got the drop on all yalls brand of choice...the 10 miii or l a st years can be got for under 300..and i promise it will appear like a flagship device next to samsung a series and all motos and most nokias...they only got 3..good-10..better-5...best-1..even paid off techie sites have argued its the top 1 2 or 3 flagship on the market...and they got another thst can hardly be called a phone..the pro..5g 360deg transmits in both mm wave and sub 6 signal...transmits 4k video data or streaming movies for van news crews...and records video like their movie cams

ChiefTimi, 10 Aug 2021There are way better options with way fewer headaches for the same priceNope,, where I live this phone is way cheaper than other brands with the same specs.

Ishara, 21 Aug 2021Very slow phone. Every apps not responding always. Camera is very slow function. I never recom... moreR u sure u bought an original Nokia? If yes try updating it to android 11

Connecting the phone Nokia 2.4 to my PC , there is no indication or icon on my PC, because of this I cannot transfer or move files or pictures from my phone to the phone or from phone to my PC. Can I get help

SteveTheJust, 15 Aug 2021otg is available in this phone, i use it.People just hate Nokia. They are not speaking truth. Maybe they are being paid by Chinese manufacturers

Best budget phone but Nokia not interested in Android software ...

Anonymous, 28 Jun 2021verry poor phone, very slow, freezes, no compass, no otg. shame.otg is available in this phone, i use it.

Total of 270 user reviews and opinions for Nokia 2.4.
ADVERTISEMENTS

Related devices
The devices our readers are most likely to research together with Nokia 2.4