HMD relaunched Nokia in the mid-range and has been expanding down towards the entry level. Currently, the Nokia 3 is the most junior smartphone in the lineup, but a Nokia 2 has been sighted several times.

Geekbench detected a Snapdragon 210 chipset (or 212, differences are negligible) with a single gigabyte of RAM – half as much as the 3 has. It does run Android 7.1 Nougat, so no compromise has been made on the software side. Storage was not detected, but we think 8GB is a good guess. 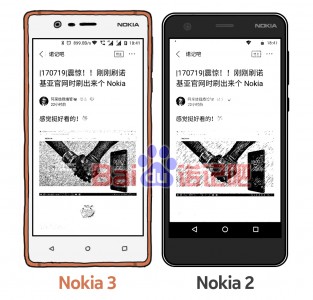 Thanks for the tip, Anvin!

Look all these under 100 euro phones out there. https://www.gearbest.com/cell-phones-c_11293/c14_4g/price_range-3/?odr=new&page_size=36&display=g&24h_ship=f&is_clearance=n All can do everything better then Nokia 2 that have onl...

For whom? This is perfect work phone. The battery lask long because the prosessor is so weak. Perfect for making calls, sending text messages and maybe even email. Everything that is needed for work phone. If you want to play or wath movies, cho...