The Nokia 3310 (2017) was expected to hit European shelves next month, but now we have a more specific date to look forward to - May 15. The date was posted by major European retailer Media Markt on its Spanish website along with a €59 price tag. 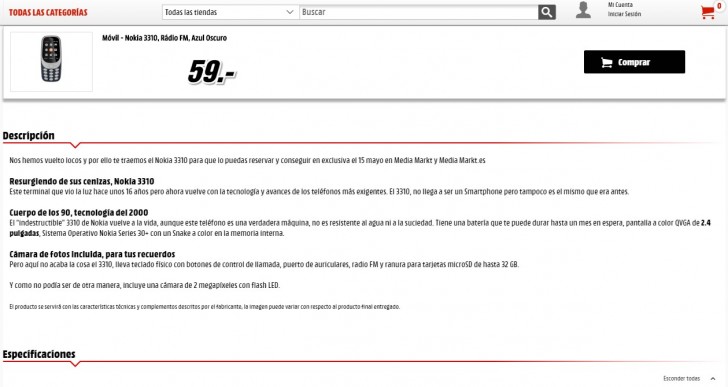 After unveiling the Nokia 3310 at MWC back in February, the announced price of the 2G phone was €49. Later however, several rumors suggested that the final price might actually be higher and the listing by Media Markt confirmed the device will indeed go for 20% more.

Previously retailers in Germany and Austria listed the launch date on their websites to May 26. UK retailers and telecoms also confirmed May for the 3310 launch, though they didn't state any specific date.

Here’s a quick rundown of the phone’s specs - it comes with a 2MP camera with LED flash, microSD slot for up to 32 GB of storage and FM radio. You will find a microUSB on the bottom to charge the removable 1200 mAh battery.

its come to india how can buy it online or shops