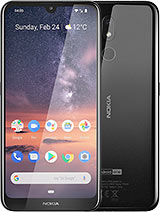 Not a bad phone besides the usual Nokia storage issues

After updating android 11,I see some improvements like touch issues, lagging sometimes,call quality issues which I faced after updating android 10 has now gone.I also noticed that my phone is running smoother than before which is very good.Besides, nothing change in the battery section,Screen recording is now added to the phone.So I can say that I got the stable android 11 update.I recommend to everyone to update your phone without any hesitation.Thank you.

There are a lot of problems that I'm facing since I bought the Nokia 5.4. Such as Banking applications, Google Authenticator and many latest and millions of user's Android Applications are not working correctly. Besides that, I'm facing notification issues, hanging issues, helding issues and too many other issues.
That is the badest device ever I have used. I waste my Rs. 32000 Pkr to bought this cheapest device. Now I'm going to sell this phone in just Rs. 22000 Pkr because no one ready to buy this phone.
I used this phone for only 1 week.
Very bad experience. Suggest not to buy this phone. Boycott this Brand.

Anonymous, 13 Dec 2020Mine has the same issue with mic...cannot send voice messages via whatssapp and even any voice... moreI have same problem here. Bought new nokia 3.2 three weeks ago

I have bought many phones but never been disappointed as I have with Nokia 3.2.No memory, gets lost midway during a call.Camera is fake.A very useless phone.

Anonymous, 07 Jan 2021Restart is solution of some problems but very annoying. 64gb variant i am using even not know... moreThe Nokia phone is a total mess.... no storage, they lied it was 16g ROM, But it's was just 5g ROM found this just a week after I bought it, And consequently to this I cant even download much application from play store,.. and the 2 original memory card I bought cracked each time I open the sim slot. the useless Nokia products destroyed it..
they lied about most things on the phone, the phone which also hangs on performance.
No sound recorder, and the phone can't voice record on WhatsApp and other app
the Google play store and some other Google apps keeps increasing in storage when I check it on storage options of the phone settings... this made new application download and updates impossible, except you delete an application and download it again...
the phone will just switched off network bar and you have to restart the phone again.
memory card can't perform on its own except you add it to the phone internal storage ,and when you do so, it will crack in no time.

I regretted buying this phone honestly. and I feel phones chips and accessories needed in making good phones, something that is very easy for Tecno and infinix to access and make good phones. it's very hard for Nokia to use to comeby.

And my advice for Nokia is please leave the Phone business world...
They can't produce anything good from their factory.
Instead of lieing and always fake about their products and allow people to waste their long earned money on there foolish Products.

I have to use loudspeaker for calls. Microphone is not working in any application including camera, google assistant, ...

Kaka, 06 Jan 2021Mine has the same issue with mic...cannot send voice messages via whatsapp and even any voice ... moreRestart is solution of some problems but very annoying.
64gb variant i am using even not knowing if it is octa core. Calls can't received unless restarted or refreshing using aeroplane mode. Voice msg on whatsapp records silence occasionally, restart is the option.
Nokia perhaps just grabbing market share on cost of quality. Even simple Chinese sets don't have such bugs. Awake before too late.

Kkkk, 02 Jan 2021My problem is anytime I open the camera it stops working and I have factory reset it but still... moreInstall any camera app from appstore.

My problem is anytime I open the camera it stops working and I have factory reset it but still the same. Any help

Hi.. I just want to share my problem and I hope you can help me... My problem is that whenever someone is calling me it just vibrates and rings everytime. Theres no like a "pop-up" and I cant answer it

Anonymous, 13 Dec 2020Mine has the same issue with mic...cannot send voice messages via whatssapp and even any voice... moreI have the same problem. I have a version of 3.64 GB of RAM and I had this problem from the beginning, plus the sudden shutdown of the loss.

Anonymous, 13 Dec 2020Mine has the same issue with mic...cannot send voice messages via whatssapp and even any voice... moreThis issue was fixed latest updates in my device.

Anonymous, 19 Sep 2020Just factory reset your phone will will work perfectlyis is about the new OS?
Will reset the phone go to the initial os settings ?

WaelTun, 26 Jul 2020i have the same problem, it is a pure trash after the android 10 update.well said

I was been a happy customer of Nokia since its Symbion OS devices starting from NOKIA5800 Express Music and continuing to NOKIA N8. Being excited with those advanced devices I have decided to give it a go with Nokia3.2 Android device. But regerttably i have been facing issue with the connectivity to the network and when checked with the Authorised service agent, they have advised it is because of Android 10 update. And I'm helpless and waiting to see if there is any way the problem can be solved with this current os or waiting to see when will be the 11 will be available for the system update hoping it will sort out the issue. Would like to know if anyone has faced this issue and keenly look forward to your suggestions if you have been able to overcome this issue. Thank you all.

Total of 229 user reviews and opinions for Nokia 3.2.
ADVERTISEMENTS

Related devices
The devices our readers are most likely to research together with Nokia 3.2