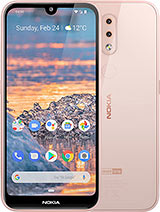 Little bit laggy under heavy gaming.But too much smooth and camera is very good with depth sensor.Even its 13 mp is better than my sister's realme c21's 48 mp.Not for heavy gamers.By the way nokia ranked no 1 in saftey features.

Jobin, 17 Apr 2021One of the camera of nokia 4.2 is fake. Check guys and tell me your opinionYes it is fake

Jobin, 17 Apr 2021One of the camera of nokia 4.2 is fake. Check guys and tell me your opinionDepth sensors are unable to take photos separately, hence why it feels fake (ask any person about their phone with more than 2 cameras)

I'm from Nigeria, I've been using this phone for a year now, got the android 11 update and so far, the phone works fine, it only lags under a very heavy load but that's what I expected from this price point, I wonder why the hate against the Nokia brand, I have friends that have been using a Nokia phone for much longer and they don't have any issue.

I had before a huawei p9 , and i was thinking that one was the worst smartphone someone could have... but then , i bought this 4.2. How wrong i was about huawei.

Anonymous, 25 Apr 2021The battery doesn't last at all, network is another issue, then again voice call is not c... moreMaybe you bought fake.. Because I've used it for 1 year for heavy online gaming and it has fallen down a lot of times without the "back opened"

Aqualord, 16 Apr 2021Stop spreading nonsense it's working perfectly wellNo it doesn't works in most of the cases.

From my experience this phone has serious issue with cellular network access. Cellular network service hangs. Unfotunatelly I received no help from Nokia support. You can find more details in my post on XDA forum: 'Cellular strength and throughput' https://forum.xda-developers.com/t/cellular-strength-and-throughput.3904162/post-84859069.

One of the camera of nokia 4.2 is fake. Check guys and tell me your opinion

Will we receive further android updates...!?

Jess, 14 Apr 2021Beware if you update Nokia 4.2 to Android 11 Instagram will not work Stop spreading nonsense it's working perfectly well

Beware if you update Nokia 4.2 to Android 11 Instagram will not work

Kryptonian Munhunter, 10 Apr 2021Android 11 update doesn't have screen recorder though 😞It has if you have a screen recording app delete it and go to notification bar you will still see it

The only reason I bought the phone is the design, perfect size and pink sand color. This phone would always be close to my heart and I would have upgraded to another Nokia phone but dunno why they ditched the Glass backa and such a perfect size. They also removed the notification light in power button. Really sad. It was such a good phone. Cheap phones these days are shit with polycarbonate back.

Kene, 22 Feb 2021Mine lost network....."No Service", and network service centre engineers cant really... moreHave you checked your SIM card? It might be "kaput".

Total of 364 user reviews and opinions for Nokia 4.2.
ADVERTISEMENTS

Related devices
The devices our readers are most likely to research together with Nokia 4.2