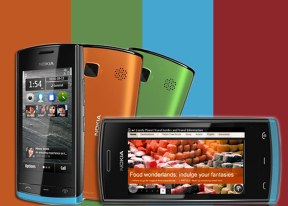 The Nokia 500 might be getting an update to Symbian Belle but Anna seems a sensible choice for a low-end smartphone anyway. The OS has been getting friendlier and more polished and the Nokia 500 is part of the new experience, whether or not it receives the latest release.

Here's a demo video of the user interface on the Nokia 500.

The new style icons should be the first thing to note – the simple, rounded icons are a good new look for Symbian – or it could be that scrolling the homescreen is much more tangible. You “push” the homescreen sideways and it moves, instead of the old homescreen that moved only after you’ve finished with your swipe.

Other things haven’t changed however – the hierarchical menu that is a throwback to a past era is still here. You can rearrange your icons, but the flat menu structure that iOS and Android have popularized is beyond reach.

The task manager only fits three apps at a time and even in landscape mode where there's much more space it still only fits three. If you have too many apps running, you’ll have to do quite a bit of scrolling.

The one UI change that really makes Anna a must-have for Nokia owners is the new text input – lo and behold the split screen keyboard.

In previous versions of Symbian you had two options – go to a new screen to enter your text on a full-screen landscape QWERTY and then go back or use that tiny, movable QWERTY keyboard that was basically a pain in the butt.

Anna however enables the portrait QWERTY, which overlays the bottom half of the screen and lets you stay in the app and type simultaneously. Besides letting you enter text without flipping the phone to its side and without going back and forth in the UI, it enables more subtle changes – like autosuggestion in the web browser that actually works.

It’s not all perfect though – several apps stick to the old text edit interface, covering the app screen even though we were using the portrait QWERTY. The Ovi store app is an example of where that happens, which was a little disappointing.

The QWERTY keyboard in landscape

So, while Symbian Anna isn’t a huge change in the interface department, it does sand away some of the rough edges of Nokia’s aging OS.

Some of the native apps also received an update, which improved the general functionality of the phone.

The gallery on the Nokia 500 hosts all your taken photos and videos in one big place. You can opt to browse all of your multimedia content (aside from songs) all together or to break them down into individual albums - captured and favorites are set by default.

There's kinetic scrolling in the gallery but it also offers a scroll bar. The Nokia 500 is fluent in multi-touch so there's pinch-zoom support with two fingers and there's the double tap option.

You can mark files inside the gallery and move them to other folders, mass mark and delete are available too. You can also do this through the dedicated File Manager supplied by Symbian since its early days.

The music player on the Symbian Anna strives to mix functionality and eye candy. It offers a cover-flow-like interface where albums and songs are placed in a floating line and you can browse them by dragging your finger. In landscape mode this effect is enhanced and receives full-screen support for your viewing pleasure.

When you select "Music" through the revamped menu icon you're greeted by a dedicated window with 5 additional icons - the music player, radio, Ovi music, internet radio and the Shazam music-recognition service. In this aspect Symbian hasn't changed all that much since the days of the N70 and beyond.

The main view of the music player holds artists and albums. When you select an artist you get a flashy pop-out menu with the songs of this artist you have preloaded.