It's time for a new gallery, really!

Once again no significant changes have been made to the gallery on the Nokia 5130. This is a real pity as we aren't really in love with the looks of the S40 gallery, the main reason being that it functions as a file manager as well.

The Nokia 5130 XpressMusic has 30MB of built-in memory expandable via microSD memory cards. The 5130 supports cards of up to 16GB of storage even though Nokia claim that it only works with 2GB cards on their site. There is also a 1GB card is included in the box.

The S40 Gallery has three different views: list with details, list and grid. Once you pick a picture you can zoom in on it to see more detail. Zooming itself is not the fastest around (especially for larger images) and doesn't allow a picture to be zoomed in too closely, so actually it is not much of a help.

Three view modes are available for the gallery

The pictures can also be viewed fullscreen and can be edited with the built-in picture editor. The latter offers a decent amount of options, but it's unlikely you'll be editing your photos on the Nokia 5130. There is also a slideshow option.

Viewing a picture in fullscreen mode and zooming are also available

We do hope that sometime in the future the file manager and the gallery will be separate applications.

Without doubt, the music player is among the most important applications on the Nokia 5130, so it's little wonder Nokia have put a lot of effort into its development. Not that they have made any great improvements to the functionality but the new looks are really nice and go well with the overall design of the handset.

The dedicated music keys also add a lot to the device. They are used for controlling both the music player and the FM radio, their functionality at a given time depending on the last used application. As we already said, the keys backlighting blinks to the rhythm of music if you enable the music light effects option. It's a feature we've seen before in the Nokia 5220 XpressMusic.

Besides managing all the typical functions, the music player also sorts songs by artist, album and genre. The player is customizable through a number of skins.

Naturally, the A2DP profile is supported, allowing you to listen to music via stereo Bluetooth earphones. If you don't like the headset that comes in the retail package, you can easily change it for another thanks to the standard 3.5mm audio jack.

But moving back to the player, we have to say that it offers a large number of configurable options. The sonic experience can be enhanced by an equalizer and a stereo expansion function. There are 7 preset equalizers on Nokia 5130 but you can easily modify two of them to suit your taste.

If you get bored with the music you have on your Nokia 5130 you can try the FM radio. It shares the audio player interface and can be skinned using the same themes as the music player. RDS is supported too.

Unlike the Nokia 5310, the FM radio on the 5130 doesn't have Visual Radio, a feature that enhances the radio experience by adding graphics and visuals to the audio content broadcast by Visual Radio compatible stations.

The video player on the Nokia 5130 is compatible with 3GP and MPEG4 formats. Videos can be played in fullscreen mode, as well as fast-forwarded or rewound. The possibility to remove the soft key captions to make better use of the full screen view mode also improves the viewing experience. Still, the 2" screen seems inadequate for truly enjoyable video-viewing.

The video player in portrait and landscape modes

The best audio quality on a Nokia

Nokia 5130 XpressMusic really did manage to surprise us when we got round to testing its audio output quality. Under the unassuming hood lays the soul of a real musician, certainly the best in the Finnish family.

Every part of the audio quality of the Nokia 5130 XpressMusic is excellent, easily rivaling dedicated music players. As you can see from the table its scores are hardly too different from Apple's iPod Touch 2nd generation and we all know how good that means.

The frequency response of the Nokia 5130 is simply great, remaining within 0.16 of the perfect line throughout the range. The distortions are also kept under perfect control and the low stereo crosstalk number is also worth noting. Noise level and dynamic range readings are pretty much as good as they get. 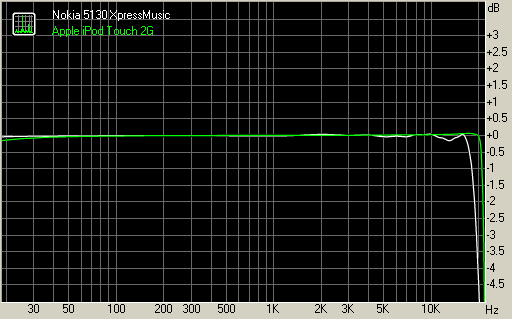