The 6.3-inch PureDisplay isn't the purest

The Nokia 7.2 is equipped with a 6.3-inch display with a 1080x2280px resolution in a 19:9 aspect - the math works out to a nice and round 400ppi. It's an HDR10-capable LCD panel that Nokia brands PureDisplay (which is also the name of the submenu in Settings to tinker with colors, more on it in a minute). 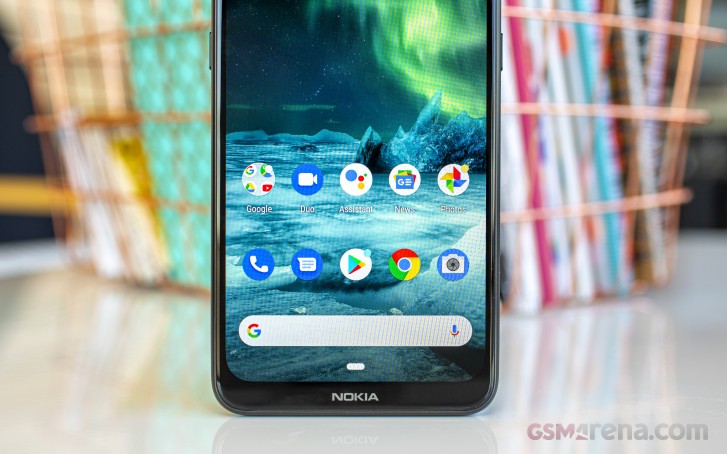 We measured a maximum brightness of around 500nits when adjusting the slider manually, with a moderate boost to up to 585nits under direct light with adaptive brightness engaged. We've gotten accustomed to seeing OLED displays most of the time, but for this LCD we need to mention contrast - we got a 1342:1 reading, and while decent, it's nothing spectacular, and you may be seeing some glow in the blacks.

Okay, back to colors. Out of the box, the phone comes with the PureDisplay feature enabled with Dynamic mode switched on and an SDR to HDR upconversion magic on as well. We tried assigning our pattern generation utility to each of the PureDisplay modes, and while the color reproduction did change from mode to mode, the measured color accuracy against sRGB, AdobeRGB, and DCI-P3 targets was poor irrespective of the mode/target combo. And while you'd be hard-pressed to tell just how incorrectly cyan the cyan is, the strong shift of everything white or grayscale towards blue and the resulting general coldness will be very much evident.

The one toggle in PureDisplay that arrives in an off state, Auto white balance, can help reduce the blueness, to a certain extent. However, that only depends on the ambient light - it's sort of like Apple's True Tone feature. It will adjust the display's color reproduction according to the ambient light temperature and potentially produce truer colors. The thing is though, while it will likely yield consistent results when exposed to the same light, you can't rely on it to give you the same colors between different environments.

Nokia says the 7.2's display is HDR10 compliant, but we couldn't get YouTube or Netflix to agree on that, and we only got SDR streams from these two. We tried flicking virtually every setting on or off too, to no avail.

Anyway, we ran our usual tests on the Nokia 7.2 and got predictably unimpressive, though not downright bad results. Less than 10 hours of video playback is rather low, particularly in a world where OLEDs can easily do, say, 15 hours. The 10:21h result in web browsing over Wi-Fi looks slightly better compared to others, but is still below average. If you're still into phone calls, that's an area where the 7.2 will deliver good longevity - we clocked almost 27 hours.

All these numbers (plus the standby power draw) work out to an overall Endurance rating of 69 hours. 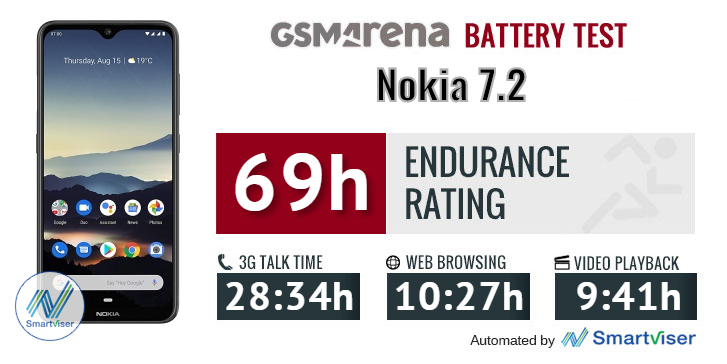 Our battery tests were automated thanks to SmartViser, using its viSer App. The endurance rating above denotes how long a single battery charge will last you if you use the Nokia 7.2 for an hour each of telephony, web browsing, and video playback daily. We've established this usage pattern so that our battery results are comparable across devices in the most common day-to-day tasks. The battery testing procedure is described in detail in case you're interested in the nitty-gritty. You can check out our complete battery test table, where you can see how all of the smartphones we've tested will compare under your own typical use.

The charger that comes with the Nokia 7.2 is a modest 10W one, rated at 5V/2A. It's got no Qualcomm QuickCharge support, even though the phone's hardware should have been good for some QC 3.0 action.

The Nokia 7.2 has a single loudspeaker diverting sound through 2 cutouts on the bottom of the phone. It gets quite loud, earning a 'Very Good' combined rating in our test. Oddly enough, that makes it quieter than the 7.1 before it, though it still manages to outperform the 7 plus. Sound quality isn't particularly great, and while it will do for ring tones, music videos sounded dull and uninspiring to us with muffled highs and non-existing lows. 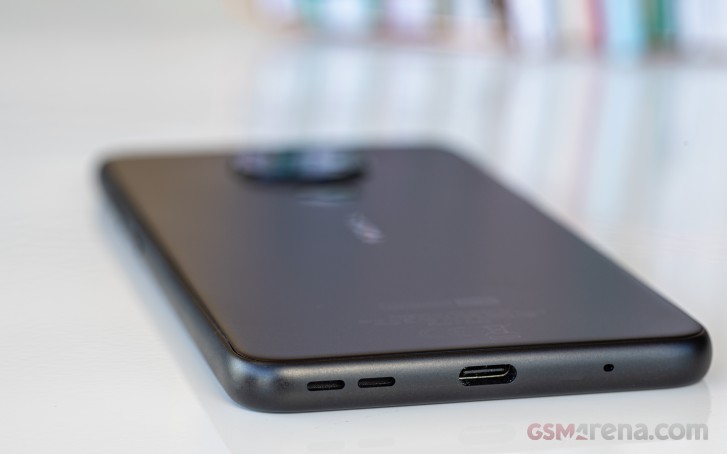 The Nokia 7.2 output with an external amplifier was perfectly accurate with no sub-par scores in our test. The phone fared very well with headphones too, with the only affected reading being the stereo crosstalk and even that by a much lower than usual amount.

Loudness was disappointing, though in both scenarios, which is something to keep in mind if you have high impedance headphones or like ear-busting volume levels.