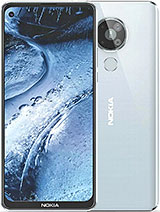 Got some good specs... hope its not overpriced, this phone will be replacing my nokia 6.0 after 3 years..

Hope it won't be over priced

homayoun1900, 16 Dec 2020why nokia didnt use superAmouled for display? IPS deffently is boring. after a few minutes i ... morei think the reason why they dont put amoled display in phone because they only have 4000mah,.. if it has amoled display with 4000mah, i will drain quick..

This phone has got good specs and I really like to see how brand-new snapdragon 690 5G works😃 However, I don't like two things about this phone: 1. Using eMMC5.1 instead of UFS2.1 for internal storage does not make sense!?! and
2. Screen to body ratio is really disappointing (only 80%!!!)

why nokia didnt use superAmouled for display?
IPS deffently is boring. after a few minutes i use ips display i have very very bad headache and eye pain and nausea.

Looking forward to the phone but not the size. Given the 30% discount on the 8.3, this can't be priced more than the 8.3.

joe nodden, 16 Nov 2020I'm not going to make any comments on Nokia's software, but Nokia's hardware is... moreTrue, realistically I wouldn't buy any of their phones for those reasons. Definitely far from being the best bang for your buck. I do like Nokia as a company though, it's one of the few brands that doesn't make me cringe.

NeonHD, 15 Nov 2020Yeah, I think it's all pretty clear now. He obviously has a bias against Nokia. No us... moreI'm not going to make any comments on Nokia's software, but Nokia's hardware is absolute garbage for what they charge for their phones. That's not bias it's factual. Like the Nokia 8.3 that costs about twice as much as the OnePlus Nord despite being worse? Garbage. That Nokia 9 Pureview that they launched with an outdated chipset? Garbage. The fact that they hardly ever use OLEDs on any of their phones, let alone high refresh rates? Garbage.

I betcha they're gonna charge some ridiculous price like $350 at the minimum for this trash.

Carol, 06 Nov 2020Well, he did not get the memo, still thinks he's correct. don't worry, trolls come a... moreYeah, I think it's all pretty clear now. He obviously has a bias against Nokia.

No use of replying back, I have already proved him wrong from the start.

NeonHD, 31 Oct 2020LOL get off your high horse mate, stop trying to pretend everything you say is correct. &gt... moreWell, he did not get the memo, still thinks he's correct. don't worry, trolls come and go. hmd and NOKIA remains.

Why does Nokia insist on USB 2.0 in 2020? How much more expensive would it be to have USB 3.1 and be able to use desktop mode. It's a pity because the CPU can definitely handle it.

NeonHD, 31 Oct 2020LOL get off your high horse mate, stop trying to pretend everything you say is correct. &gt... moreSlow? Any Xiaomi/Samsung/Oppo even Tecno is faster than a Nokia.
6.1 Plus and 8 Sirocco, in one word are pathetic.
Not to mention that I have to INSTALL an app for even a simple screen recording.
And most importantly, stop spreading rumors that "FEATURE-RICH PHONES ARE SLOW". You want to know what is a slow phone? Just try uninstalling any app on a Nokia and simultaneously use another app. I can bet IT WILL RESTART, after staggering for about 30-40 seconds. Smoothness is determined by "how much your brand has optimised your phone", not "how many features they provide." And Nokia has WORST software optimisation. Apart from it only cheap Asus and Motorola are the ones to "feature a featureless Android"

And yeah, you don't care "how much market they make"? And that entire market (making up to 70-80%) don't care what users like you care. That's it.

Screen could be smaller. Hate phones with big batteries but a big screen that sticks up all of that SOT. Pixel with 5.8 doing decent numbers. This should be 6-6.2 max.

Memory slot is dedicated or hybrid. Here it says hybrid, but most of the sites are saying Hybrid

Tired of all the useless nerd talk.. any news on a release date and price?

SShreyas, 16 Oct 2020Laughable comment, nothing else. As I said, I can change EVERY element of UI. EVERY. Che... moreLOL get off your high horse mate, stop trying to pretend everything you say is correct.

> "Cherry picked ROMs? Man, get out of your house. These ROMs together constitute for about 60-70% of the market."
Uh, so? And tell me, how is ANY of that relevant to my point? I don't care how much these ROMs make up the market, my point was specifically referring to that fact that those roms AREN'T based on stock Android, so it's an unfair comparison. You are arguing against your own argument.

>"And who on earth would use featureless OS? Not many. Even less that 10%."
So you want to use an OS packed with tons of useless features and bloatware that makes the phone feel slow and cluttered? Got it.

Total of 164 user reviews and opinions for Nokia 7.3.
ADVERTISEMENTS

Related devices
The devices our readers are most likely to research together with Nokia 7.3